The impact of Google and Facebook on people’s lives is revealed by the fact they now account for one in every three and a half minutes of the time Britons’ spend online.

British adults accumulate 42.7 million days a month across websites owned by Google – primarily search, YouTube and Gmail – the equivalent of more than 1 in every 6 minutes (17%) of UK internet time. Around 11% of time (28.4 million days) is spent on Facebook-owned properties which include WhatsApp and Instagram, according to measurement firm Verto Analytics.

Google and Facebook recently announced combined revenue of £27 billion from companies advertising on their sites in the last quarter alone. “Google and Facebook’s share of internet time and ad revenue is staggering considering the hundreds of thousands of websites that exist,” said Hannu Verkasalo, CEO of Verto Analytics.“Estimates suggest they’re hoovering up 80-99% of every new pound companies spend on online advertising. The share they take of this revenue is now roughly double their share of people’s time online because companies believe they’re the most effective sites to advertise on and their technology makes it very easy for advertisers to do so.” 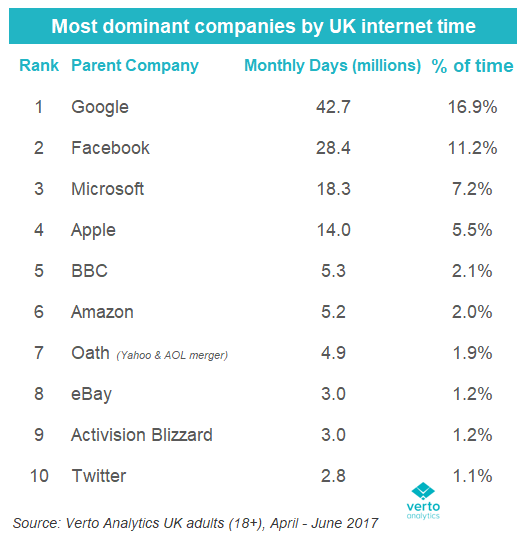 The 10 most dominant companies in the UK – all of which are US firms, except for the BBC – account for half of internet time, which Verkasalo says “leaves the other hundreds of thousands competing for the other half.” Alongside the BBC, Sky is the only other UK company featured in the 20 most-heavily used sites in the UK.

“The implications of a handful of dominant companies – particularly just two – go beyond simply which sites we surf. You have fewer sites increasingly controlling not only what you see and hear but where advertising revenue goes,” explains Verkasalo. “The erosion of newspapers, magazines and high street retailers plus the web giants sway over political elections is just the beginning.

“Advertising funds companies and ends up having a big impact on what products and technologies get developed. In tandem, increasing power and wealth going into fewer hands means it’s easier to move into other business models and industries, influencing society in new ways – think Google’s move into driverless cars and Facebook’s dive into Artificial Intelligence. It used to be the likes of NASA that drove the future, now it’s down to what search engine and social network you use.” 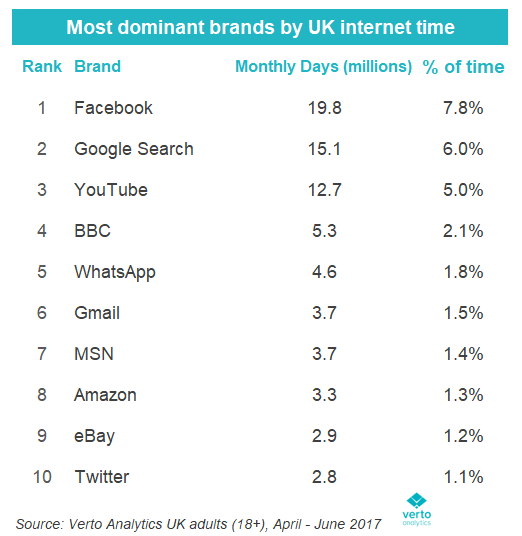 About Verto Analytics
Verto Analytics provides a consumer-centric audience measurement solution for monitoring the complex behaviour of today’s consumer on every device, app and platform they use throughout the day.
Facebook Google Online people’s quarter swallow time

New Poll – Are Google taking too long to bring everyone the same services?﻿
May 6, 2014