Honor launched the Honor Play today, the first of a game changing new product series to deliver the revolutionary fast gaming and entertainment experience the global gaming industry has been waiting for. Meanwhile, at the Honor Play launch event held on the eve of IFA in Germany, Mr. George Zhao, President of Honor, unexpectedly unveiled the Honor Magic 2, the brand’s new flagship smartphone.

The Honor Play is a performance beast with the groundbreaking graphics processing technology GPU Turbo to meet young gamers’ demands for “lightning fast” graphics processing capability and extended battery life. Building on the success of the first-generation Honor Magic launched in 2016, the Honor Magic 2 boasts an intelligent Magic Slide feature, which gives users a real full view display and instantly activates the world of AI with one sliding motion. The device will also be the first Honor smartphone powered by the Kirin 980 processor.

Completing the Honor portfolio strategy, the Honor Play offers young people what they really want from their smartphone, an immersive non-stop gaming and entertainment experience. Until now, however, this experience has been plagued by space and capacity problems, thermal efficiency and battery consumption issues because of the popularity of tactical tournament games, and because AR, VR and HDR rendering rely on fast graphic processing power. Working with PUBG MOBILE, which is one of the most popular tactical tournament games, Honor took every effort to not only solve these performance problems but develop the first-ever gamer-oriented phone, the Honor Play – a “Game On” moment for the industry because it will redefine the mobile gaming user experience at an affordable price point of £279.99.

The Honor Play offers an unprecedented gaming performance and a 24/7 “Always On” entertainment experience. This launch brings two ground-breaking and industry leading smartphone technologies to gamers and casual users. The first is Honor’s new GPU Turbo, which dramatically increases the graphics processing and computing efficiency, and the other is Honor’s advanced AI technology, which revolutionises the smartphone camera function.

The GPU Turbo is an innovative hardware-software integration solution that leaves Honor’s competitors trailing in the dust. As the global strategic partner of PUBG MOBILE, Honor Play has dramatically increased the graphics processing and boosted the average frame rate to 39.46 on PUBG MOBILE. The jitter rate has been reduced to 0.21%], more than a full percentage point below Honor’s key rivals, and the battery life has a 30-minute lead over other flagship devices with 4.5 hours of solid gameplay.

The Honor Play in-game experience has been AI-enabled for total immersion. The 4D gaming experience includes 3D audio effects and AI vibration customised for the most popular mobile games and matched to in-game objects and scenarios. AI 4D Smart Shock can be enabled for 30 different scenario vibrations,  according to the direction of approaching enemies or gunfire. This is complemented by the 3D surround sound by Histen 3D audio technology, an ultra-wide 3D sound field that immerses the player in a cinematic audio experience.

The Honor Play is one of the smartest mid-range phones on the market. With AI motion detection and intelligent recognition, snapshots using the 16MP front camera are now easier than ever before. Casual users will experience just as much fun from this device as gamers, thanks to the huge 3,750 mAh battery which allows for heavy gaming and entertainment use, equaling more than 15 hours of video streaming and 95 hours for music playback, even with the 6.3-inch Honor FullView FHD+ display. A range of smart features are enabled by the Kirin 970 NPU chipset which, together with EMUI 8.2, unleashes a truly AI-mazing processing power. 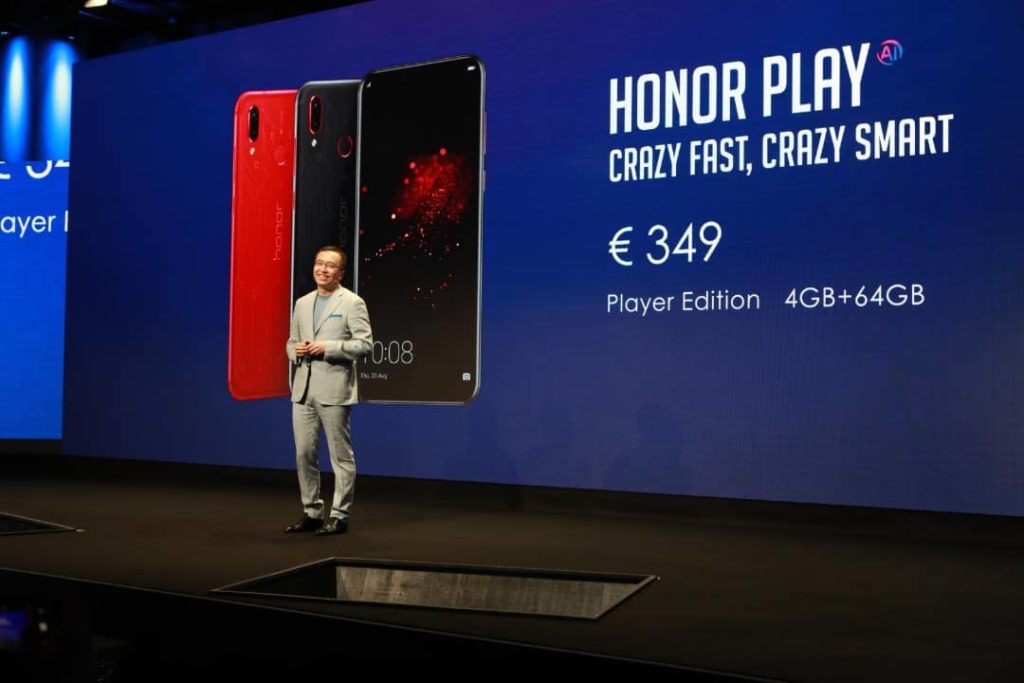 The slim and subtle unibody metal design comes in a range of colors for all gamers: Midnight Black, Navy Blue, and a special Player Edition patterned in red and black. The design retains the body of a typical 5.5-inch screen device to ensure it fits comfortably in your hand and packs a 19.5:9 bezel-less display.

“The Honor Play is a new moment for the global gaming industry. Honor will be the first to offer a phenomenally fun mobile gaming and entertainment experience,” said George Zhao, President of Honor. “But we don’t stop at making a good product, we are creating the future of mobile gaming with young people worldwide. The Honor Play is our response to their demand for a fast, smooth gaming performance and entertainment experience.”

Sharing the same passion for speed and performance, Honor, the smartphone e-brand is working with Audi to celebrate the arrival of Honor Play. As the official partner of Audi Sports R8 LMS Cup, with the Audi R8, the Honor Play combines sleek design and blistering performance. Both Audi R8 and Honor Play deliver speed that surpass the limits of the imagination. 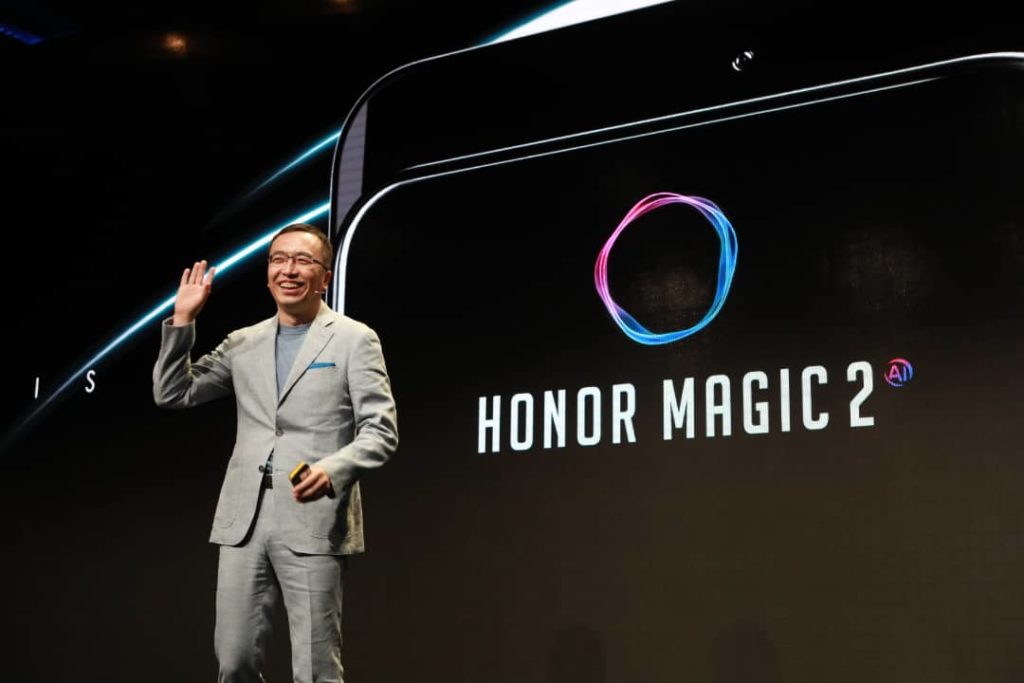 “The launch of Honor Magic two years ago introduced the concept of the AI smartphone to consumers”, noted Mr. George Zhao, President of Honor. “The first-generation Honor Magic was an era-defining smartphone that transformed the industry. In addition to AI-features that make the phone truly smart, Honor Magic’s ground-breaking all-curved panel design and powerful 40W charging support have reshaped smartphone design and become a benchmark for all smartphones. The developments of these futuristic flagship devices are closely followed by the smartphone and AI industry, and now the Honor Magic 2 has arrived.”

With intense competition across global markets, many smartphone brands are striving to enhance the user experience by offering a full view display. However, most, if not all, phones with this new feature have sacrificed user friendliness and the photography experience. The designs focus solely on screen layout and presentation improvements, failing to bring true value to users.

In contrast, the intelligent Magic Slide feature of the Honor Magic 2 is designed to achieve full view display without compromising other practical functions. The hidden-from-view front camera enables a nearly 100% screen-to-body ratio, overcoming the challenge of incorporating a camera in a notchless design. It delivers a superior visual experience with great convenience and practicality to redefine the value of a full-screen smartphone.

By sliding the top screen, users can instantly activate all AI features. This innovation in design is based on ergonomic science. In addition to its revolutionary design, the Honor Magic 2 is the first Honor smartphone powered by the Kirin 980 processor, unlocking the phone’s groundbreaking AI-performance and again raising the bar in smartphone performance and user experience.

Moreover, the Honor Magic 2 comes with the 40W Magic Charge for maximum charging power. To further ensure safety, 15 layers of protection are also embedded in the smartphone. The phone can automatically identify the battery, cable and charger and only when all of the three parts are identified as safe will the Super Charger start.

Debuting in Germany, the Magic 2 will be a key flagship that is showcased at the world-class IFA exhibition to reaffirm the company’s confidence in this latest model. In the first half of 2018.