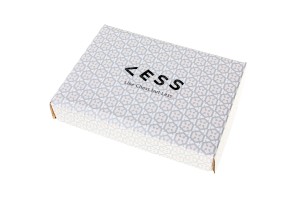 Every now and then I get asked to review something out of the ordinary, well out the ordinary for me, and I make no secret that I love board games or tabletop games as they are more commonly known as now, so I was extremely happy when I got asked to take a look at a completely new game called “less” by invented4.
In fact what I was told is ” it’s like chess but less” the makers have started a kickstarter campaign today to make this a reality i have never been asked to take a look at something pre kickstarter so you can imagine i was a little excited, but I know you want to know more, you want play-ability, you want rules and so on. 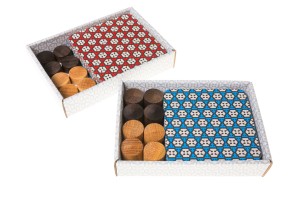 The rules a few and simple, the aim is get your four counters to your opponents corner in fewer moves than your opponent and only allowing three moves per turn, it’s seriously simple to pick up and play, so simple in fact I had my nine-year old and five-year old playing 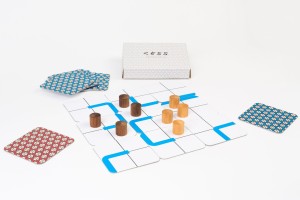 You can’t move diagonally and you can’t jump a wall with your opponent the other side, you can however jump your opponents counter using only one of your three moves which gains you an extra tile so instead of jumping one tile to the next if your opponent is in the next tile you jump over him to the one behind thus making two moves but only using one.
As you can see in the picture above there are the blue lines these are walls they require two moves to jump but like I mentioned you can’t do that if your opponent is the other side and a double wall ( two walls together) is three moves.
scoring is a little bit more tricky, it is added by the difference in moves so if whites last move only uses 1 where as black uses all three then the difference is two. 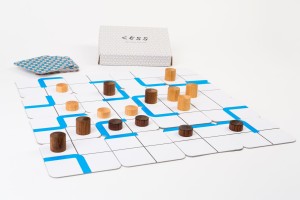 The pack I received came in two boxes so that I could enjoy a four player game ( 4×4 square )as well as two player ( 3×3 square).
I went into playing this not expecting much and well zombiecide it isn’t, less is a new classic it’s a new chess for our generation, its quick and you’ll use your brain to work scores out as well, it comes in a reasonable package so it can be taken around without taken up much space or weighing you down.
Tabletop games are more in demand than ever and less by invented4 is on kickstarter as of today so go and back it and get your copy of this instant classic strategy game to add to your collection or to start your collection, I have included a link below to both the kickstarter page and their official page which includes an online version of the game.