What do you get when you take a classic game like Lemmings, mash it together with Disney’s “Where’s My” series of touch games and sprinkle it with the current fashion of 8-bit graphics and audio?  Micro Miners, that’s what.

Like Lemmings your miners will march about aimlessly, until they come across precious deposits which they will happily mine for you.  You have two tools – digging for removing soil and building for replacing it.  So you dig a hole so that your miners will fall towards the deposits and diamonds, and try to avoid nasty stuff such as lava and gas. 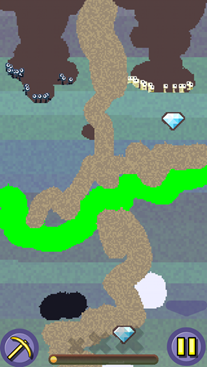 You also have the added complexity of black and white miners, where the white miners mine steel but not coal, and the black miners mine coal not steel – it’s a death sentence for any miner that comes into contact with the wrong substance. 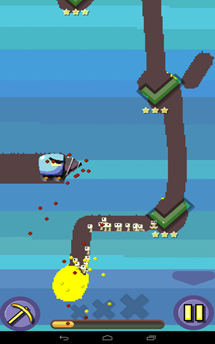 The screen is constantly scrolling deeper downwards, and if you’re not fast enough your miners will die when they scroll off the top of the screen.  It isn’t absolutely essential that all your miners survive, but to pass the level you can only miss a maximum of three deposits. 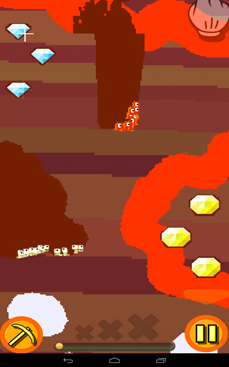 As you progress various techniques are demonstrated to help you deal with the trickier situations.  You also have bonus items such as bombs and a Superminer to get you down past obstacles such as rock.  The miners often make sarcastic comments via speech bubbles, which adds to the whole humour of the game.

I enjoyed the Where’s My… games and was a big fan of Lemmings back in the day.  Despite having similarities to these games Micro Miners manages to be original.  At the start the puzzles aren’t too tricky, but some of the later levels will have your scrambling to get your miners down to the deposits in time.  As a bonus it’s a relatively cheap paid game with no in-app purchases.  So it’s no surprise that I really like Micro Miners, and would recommend you pick it up from the Play Store link below…