I’ve been checking out a small, handheld digital camera by DBPower. The camera is quite small, smaller than the ones most of us would be familiar with, that were more prevalent before the rise of smartphones began, about 10 years back. Unfortunately, my experience with the unit was far from satisfactory. So much so, that I haven’t even bothered to test out all of the features.

Let’s start with it’s general functionality, and accessories. The unit is all in black, with some chrome accents, as well as a couple of relevant buttons on the camera, that are also black, though one does light up when charging or in use. It is powered by a 1,200 mAh battery, that’s charged via a USB type A cable that connects to the camera via a proprietary connection. There is a power button on the right-hand side, that doubles as the LED light for charging status. There’s also a WiFi button that isn’t clearly marked as such. On the right hand side of the top of the camera, when the user is pointing it forward to take a photograph, is a shutter button. The camera requires an SD card, but doesn’t include one. It also comes out of the box in a transparent, waterproof case. 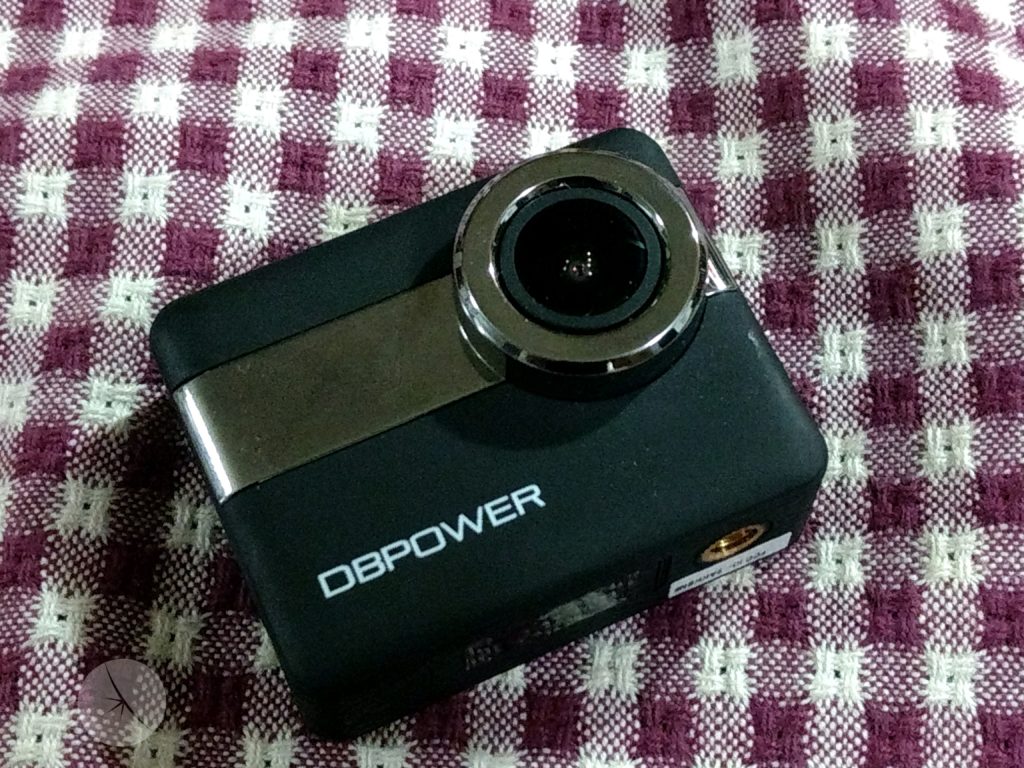 As for its performance, here’s both what I did test, and how it failed. Being a camera, the most important thing that it can do is take photographs. Beyond taking photographs, which I will address in a minute, the unit can also take video, and apparently has motion sensitivity for activating. In testing the camera proper, I found it to be quite underwhelming. And what I mean with that, is that regardless of what I toggled in the settings, all the pictures were formatted in the same way. To wit, I was unable to turn off the wide-angle perspective, giving everything a bit of a “fisheye” point of view. I found this to be quite disheartening and frustrating, as I have no personal need for that type of camera perspective. Being unable to turn it off made the unit basically useless for me, and I’m confident that this alone will render this useless for others. Yes, I could take videos, but there were issues here as well, which I’ll address next. Had the converse been the case, where it been the normal perspective that worked, and the wide angle not being functional, the camera would still be tolerably functional, albeit of reduced capacity; it would prove difficult to recommend to others without a caveat,  but it could be done. But a unit that will *only* snap distorted images is frankly without any value to me whatsoever. 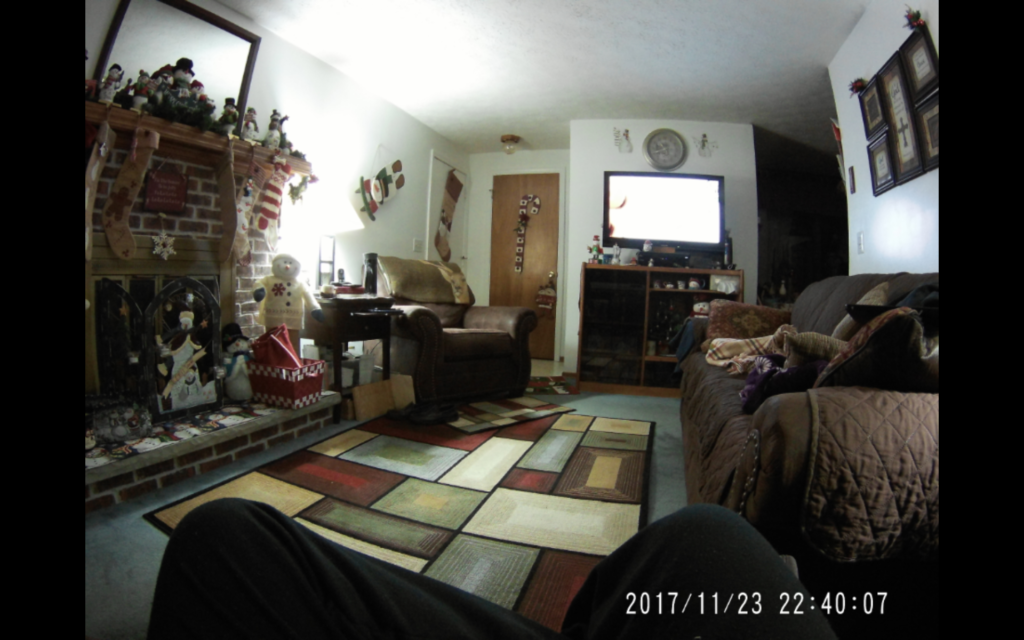 One with with Wide Angle enabled, the other was not. 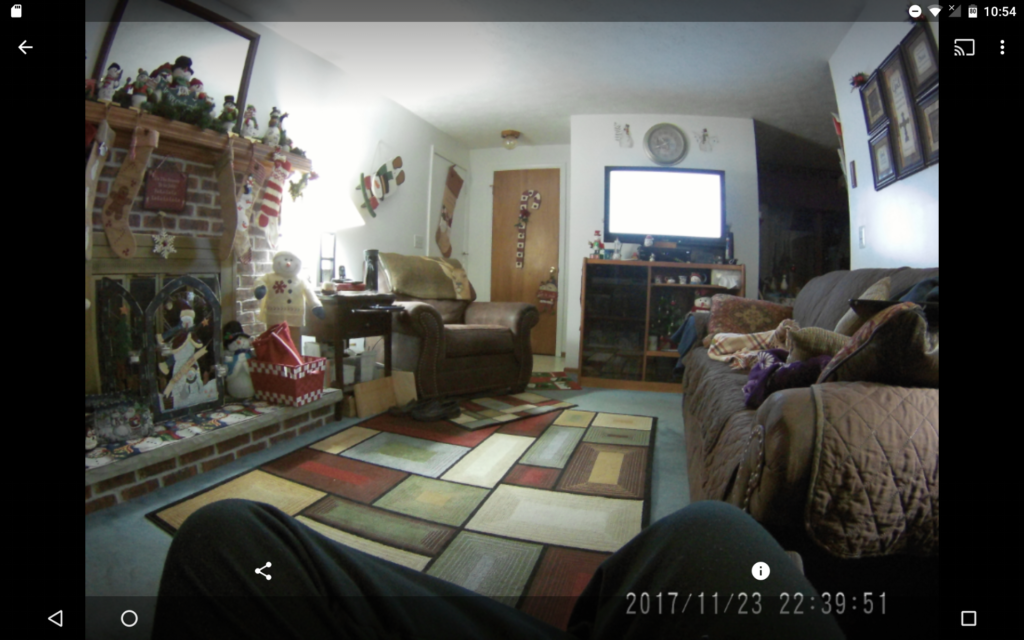 As mentioned above, the unit is also capable of shooting video. In testing how long the battery would last, I turned on the video and just let it roll, maxing out the storage of my SD card. Once I hit that point, I’d delete it and continue to record in the pattern, until the unit gave out; it lasted around 75 minutes before it completely ran out of power. Here’s where I found another deal-breaking problem. There’s a setting in the camera that determines how long it’ll last until the touch sensitive view port goes dark, in order to save/extend the battery. Such a feature makes sense, and they’re used on Tablets, Smartphones, Laptops, etc. Despite my best attempts to disable it, the screen continued to go dark during filming, after sixty seconds of not getting touched on the screen. This occured consistently, despite the setting being disabled. Only once did it run longer than sixty seconds without going dark, and I was unable to replicate the single succes in subsequent attempts. I honestly have zero clues as to why it worked the one time, but didn’t work for the others. 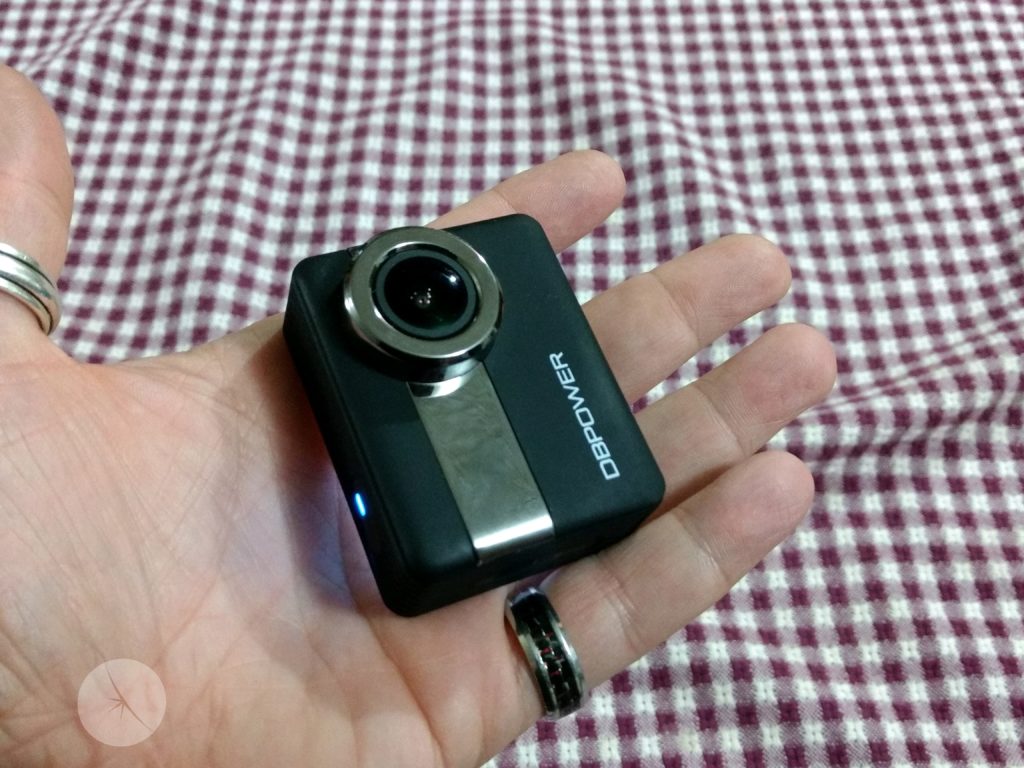 Third, this camera comes with a companion app. There’s a QR code on the outside of the box, that links to an app in Google Play, and  supports iOS from what the container indicates, but I don’t own such a device so I can’t test that. For what I could test, the device compatibility was hit or miss in Google Play. In short, the app was able to install on my phone but not on my tablet, despite both of them running variations of Android N. Setting this up was a tricky process at best, as it depends upon the WiFi button being located, but said button isn’t not clearly marked. What happens on paper is that the handset will use a form of WiFi Direct, as opposed to connecting through a router. In practice, the app did not function at all, so I wasn’t able to test this either. I was getting pop up messages in what appeared to be Mandarin, and despite indicating that it connection between my phone and camera existing, I wasn’t able to utilize any of the functions that the app seemed to have. As best I can tell, it was designed for me to view the camera from my phone’s screen and control it through my phone as well, but all of the buttons were grayed out and completely unresponsive.

In short, I’m completely incapable of recommending this device in any way, or on any level. Given the frequent sense of futility and frustration that I experienced, I saw no purpose in testing it further. I have no idea how good the waterproofing is, because there’s no sense in taking a camera that doesn’t work with me on the water, nor tinkering with any of its other purported capabilities. On a scale of 1 to 10, this device get to zero. You’d be better off sticking with your smartphone in this day and age, as it is. But to have a device that is performing so poorly, just about any alternative will suit you better.