Sold by EC Technology, I’ve been using one of their speakers during this past week or so. This is a speaker that is designed to be portable, as it’s fairly small in its design (even compared to the other bluetooth speakers I’ve tried), and has a removable lanyard attached to it. In an odd twist, it has a bit of an unusual shape. 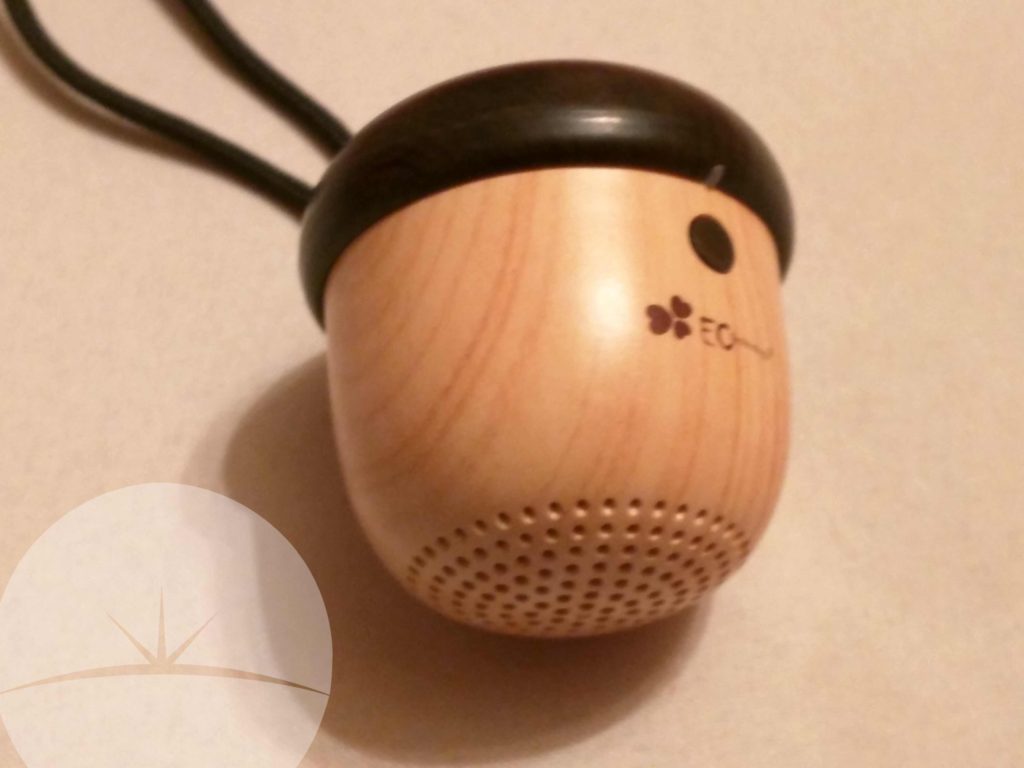 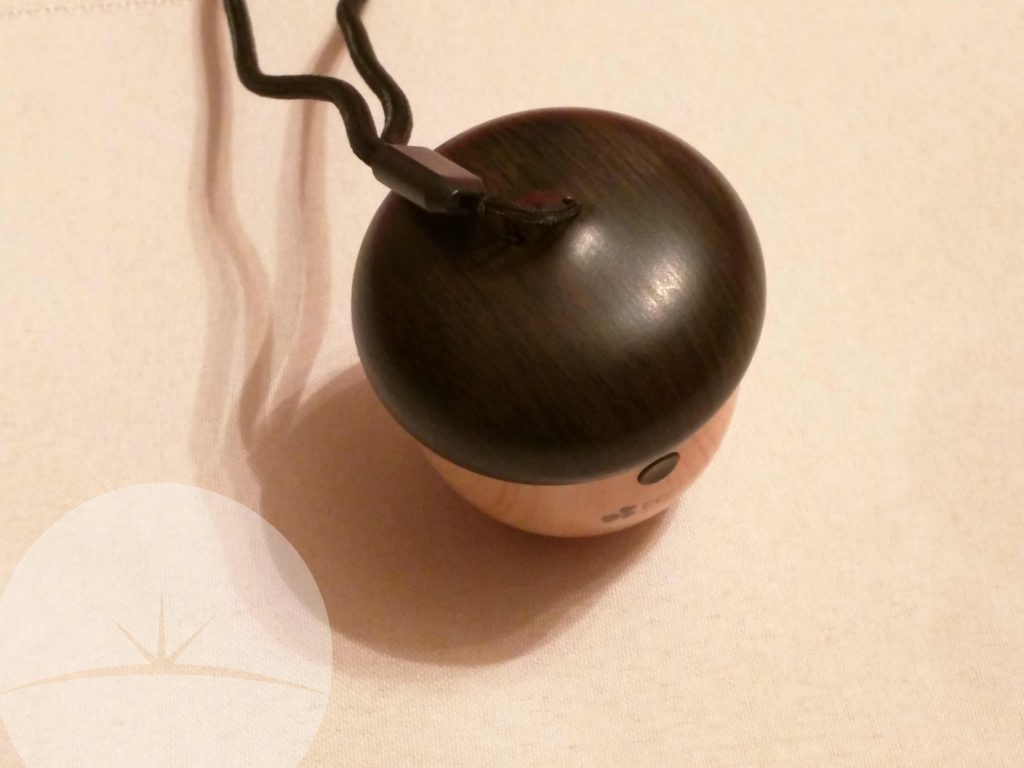 The appearance of this is shaped like an acorn. As they sayings go, “there’s no accounting for taste”, along with “one man’s trash is another man’s treasure”. These are quite apropo in this case. The speaker grill is downward facing, at the bottom of the acorn, while the lanyard is attached to the top, where an acorn would be attached to a tree branch. The top/cup of the acorn shape is designed to look like a darkly stained wood, while the lower/outer shell looks more like a light colorned, natural wood; the entire unit is comprised of a plastic material. So if acorns are your “thing”, this could be a neat accessory, andI think it’s what EC Tech is going for. That being said, there’s a few small things about its appearance that confusse me, considering it was obviously designed to look like an acorn. First, the on/off toggle. It is the same dark bown color as that of the cup, yet its placement sits slightly below it, by about half an inch. Why not either place the dark brown button on the dark brown cup, or color it lighter so it blends in better with the part that resembles the shell? It’s not that the two colors clash, but it isn’t subtle either. Second, for the amount of surface space that this speaker has, the amount of marking and branding strikes me as excessive. Wether it’s EC’s shamrock logo and name on the front (below the power toggle), or other disposal and recycling emblems on the back (along with the microUSB charging port) that are in the same dark brwon, or one could even argue the speaker grill on the bottom, that doesn’t leave as much space for just  “looking like an acorn” as I would have liked. From a distance, it’ll pass. Up close though, it seems like a lot of visual noise that could’ve been handled differently. To round out the appearance, there’s a single LED buried in the cup, right above the toggle, that lights up red when charging (and goes out when it’s done) and lights up blue for things like pairing. You can’t really see it when it’s not lit, so it “hides” well. 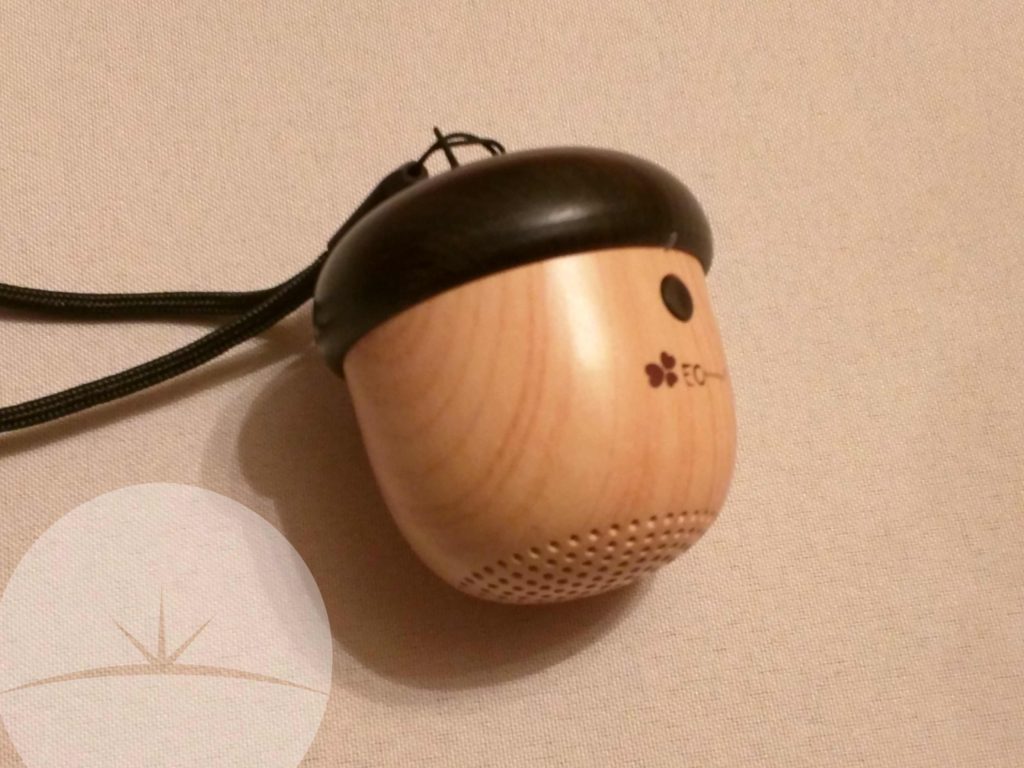 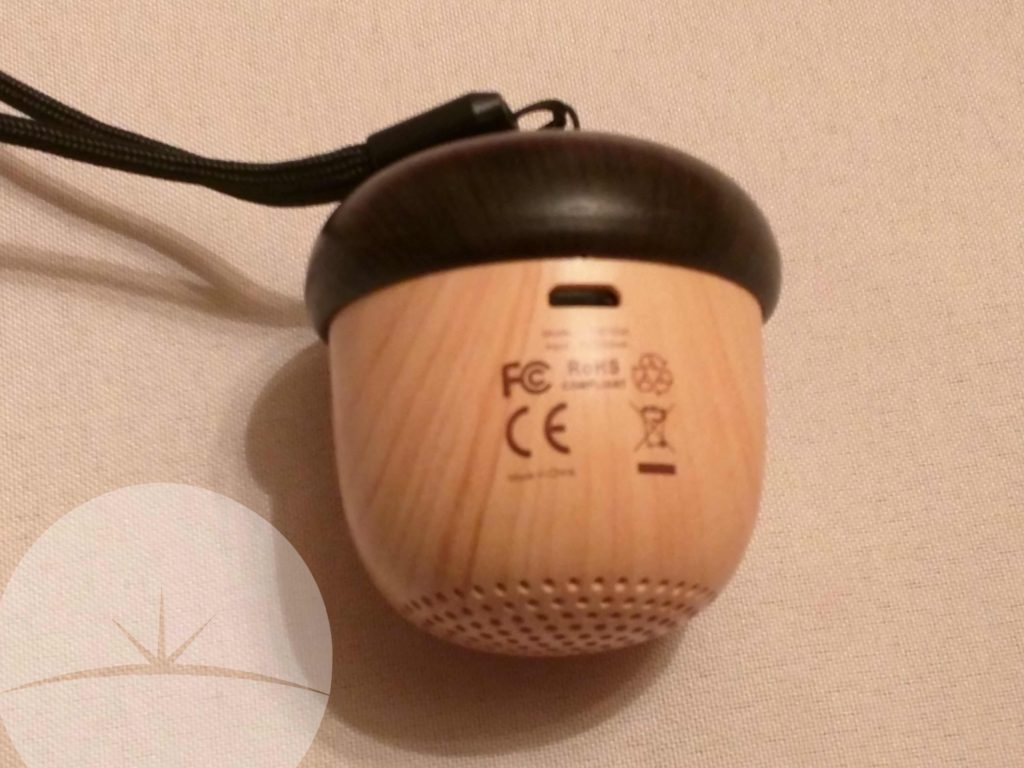 As for its peformance, I would classify it as servicable. Given its small size, I can’t say that I was surprised at it’s perfomance. For its sound, the volume was OK, but the range of the sound (regarding how high and low the highs and lows sounded) didn’t impress me. It wasn’t bad, but other bluetooth speakers I’ve tried have sounded better. The battery lasted a litle under five hours, in two sessions of streaming music (three hours the first time, and a bit over two and half hours on the second session). Again, with it’s compact dimensions, it’s reasonable to expect that it won’t perform as well as a larger unit, so I can’t really knock it, beyond the comparative difference.
In the end, this unit strikes me as your proverbial “form over function”. I suspect that its performance is held back by its size, in order to squeeze  it into the acorn shape. Yet, if the shape is the selling point, I think it was a misake on their part to imprint other visual cues on it, as it really takes aay from the look and feel. In the end, I the best that I can do is offer a highly qualified recommendation. If you are looking for something acorn shaped, *and* you’re not highly concnered with performance, you might enjoy this. Anyone else though, would be better served with another bluetooth speaker. Thus, I’m giving it a 4. It does perform, just not super well. It resembles an acorn, but again, not super well.
Audio bluetooth
Average User Rating
0
0 votes
Rate
Submit
Your Rating
0
4