iClever is a dealer in mobile and bluetooth accessories. Their range of products covers USB cables, chargers, speakers, and so on. I’ve been reviewing one of their mobile keyboards, and found this one to be the proverbial “mixed bag”. 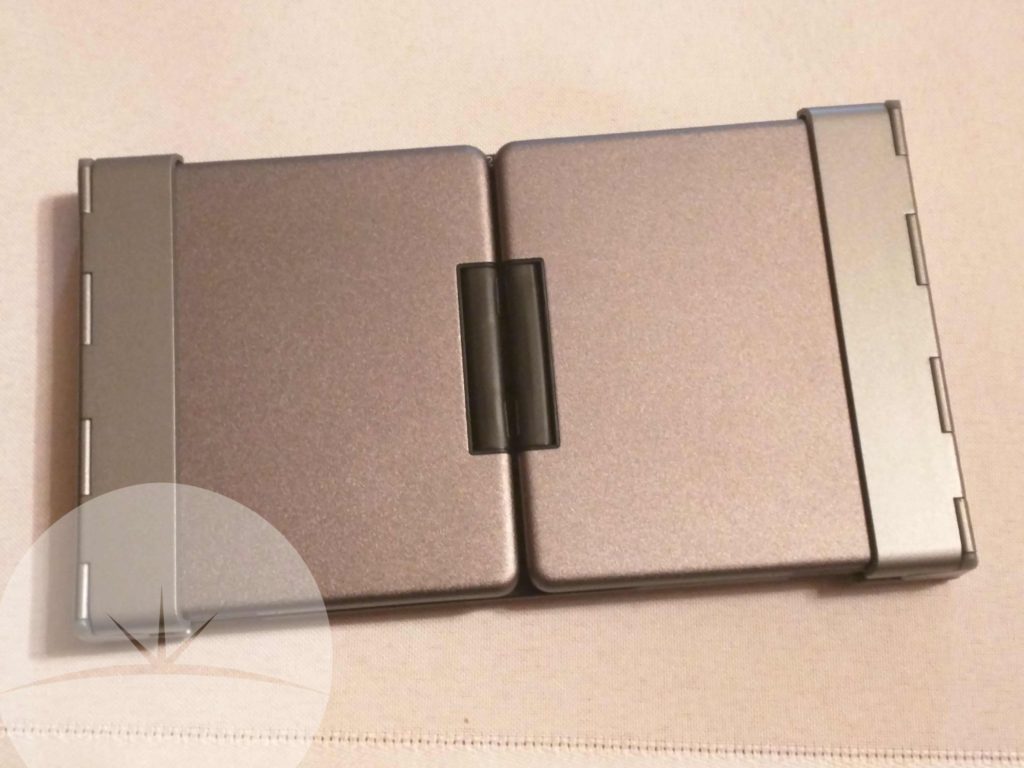 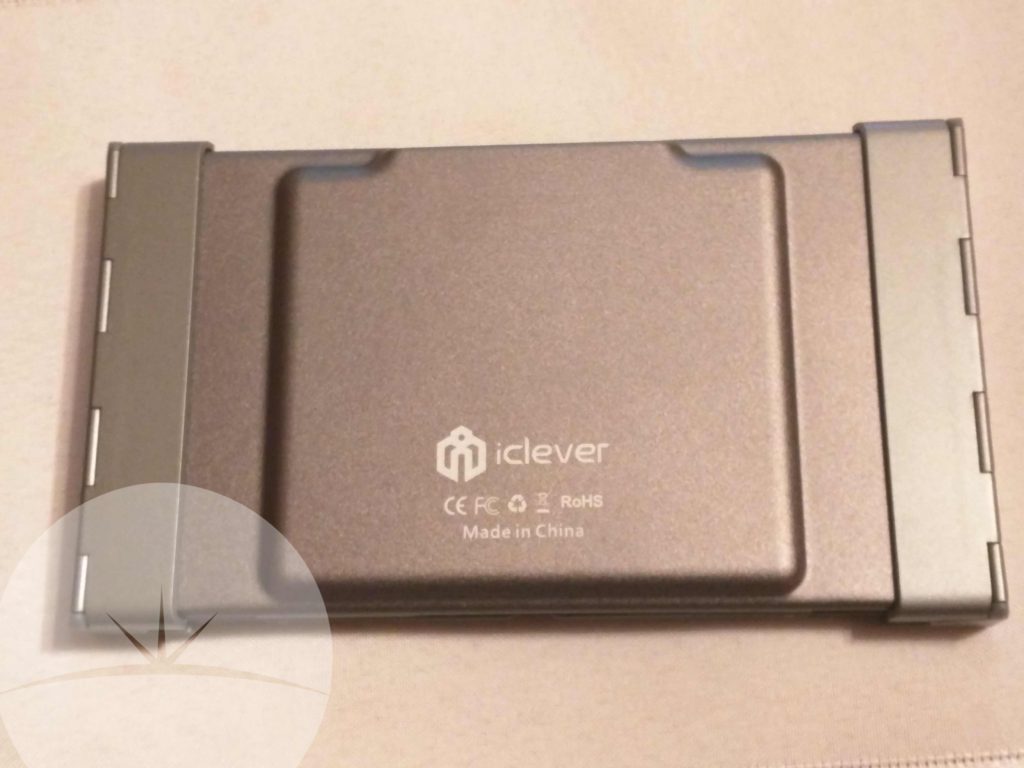 The keyboard is has two hinges, each about halfway between the center and the periphery, which enables users to close the far ends over the middle, so the keys can be covered during travel. The appearance of the keyboad is a metallic looking plastic, on the bottom/outside, and black on the top/inside, with blue or white icons and lettering. The keys are fairly flat, and akin to the style one might find on a laptop. The tactile feel of using them was decent, so I have no complaints there. There’s also a mousepad for use with fingers, along with two mouse buttons below it. It’s compact in size, right around the same size as my Nexus 6, when closed. In order to fit the keyboard into such small compact dimensions, there are some changes made to what one would find on a traditionally sized keyboard, with more on that when I address how it performed. The keyboard is also capable of pairing with more than one device, with a separate profile for each that’s bound to a hardware button, and these rest just above the mouse pad. An order of the keyboard will also include a velvet-esque carrying back, and Type A to MicroUSB charging cable. 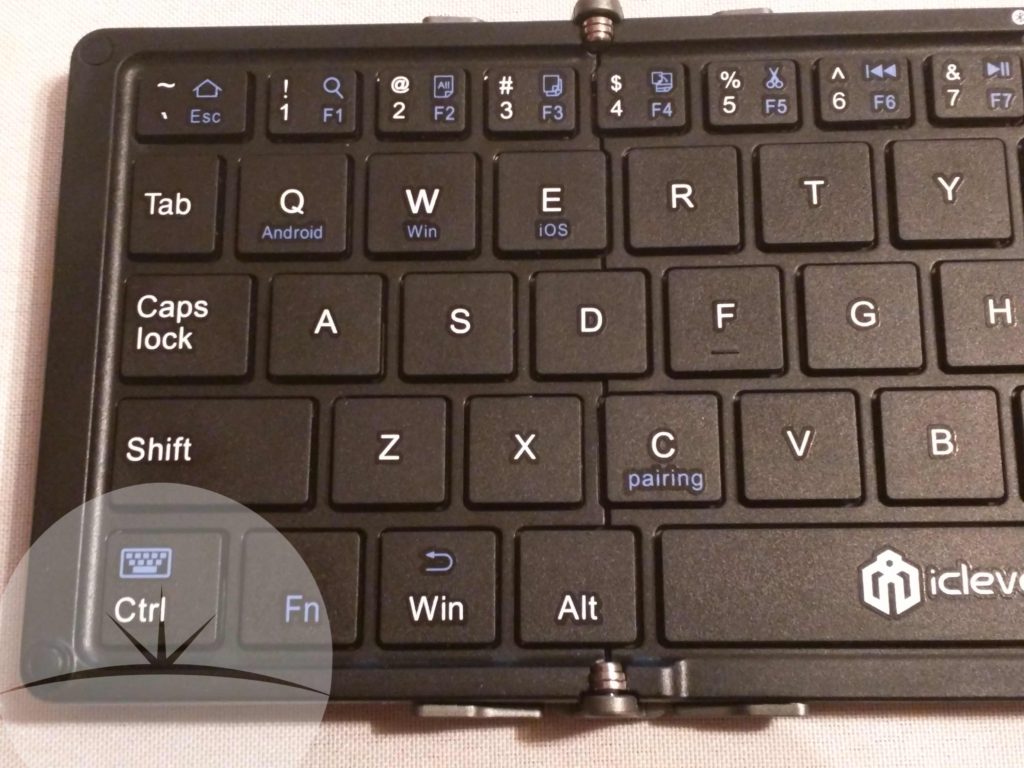 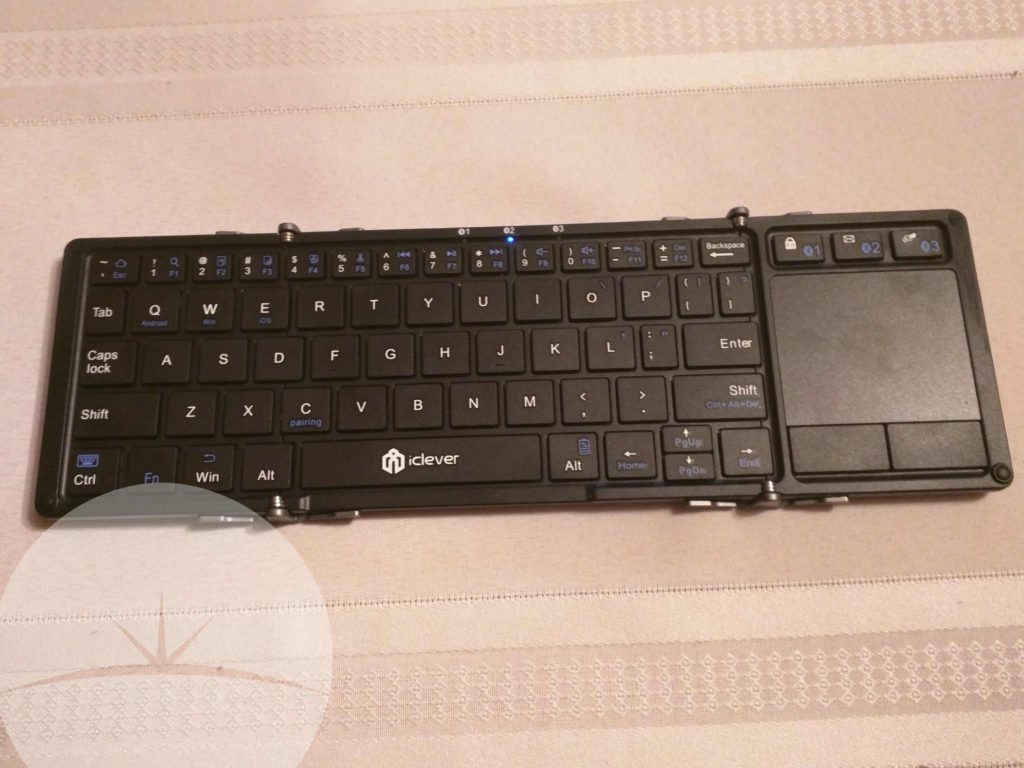 The device performed well. I had no trouble pairing it to either my phone or my tablet. Beyond that, I was able to jump between the phone and tablet in a near effortless fashion, simply by holding down the Function button, and pressing the button for the profile I wished to use; these three profiles have dedicated LEDs that are arrayed across the top of the keyboard, just above where the number row sits, with the appropriate one lit, so users know which one is active. Were I the one to have designed it, I may have placed the LEDs just above or below the buttons with which they were paired. Due the keyboard’s size, there are many buttons with multiple functions. The primary functions (such as letters, CTRL, Win, Alt, Arrow keys, et al) are listed in white, while secondary functions are listed in blue and are activated only when the Fuction key is held; while many letters and white keys have only one function, all blue functions are located on a key with a white function. This matters on multiple levels. First, the feel and spacing of the keys seems a bit too tiny, as I am hitting the wrong buttons too often for me to really enjoy using it. Too often, I found that when I’m trying to press a key that’s located in the standard touch typing postion, that another key (or nothing at all) is there. Also, there are other times where the standard key (such as the apostrophe) are triggered differently. Intead of just hitting the Apostrophe key, it is now Function + L; other punctuation keys like the question mark are treated the same way, so one would now need to use the Function key to type “?” instead of the Shift key. As one who touch types, this makes things trickier to use when compared to a full size keyboard. The number row is compressed some as well, towards the left, as is the Backspace key. So when someone like me is using this keyboard, at the bare mimum, I need to really think about HOW I’m typing, as opposed to just WHAT I’m typing. Too often, I intended to hit the Backspace key, and ended up tapping the the Function Lock key instead, as it sits right where the Backspace key would be, on something sized a bit larger. Had I dramatically smaller hands, this wouldn’t be so much of an issue for me. i was able to test just about all of the blue function keys, and found that they all worked on Anroid, both (stock) versions of M and N. 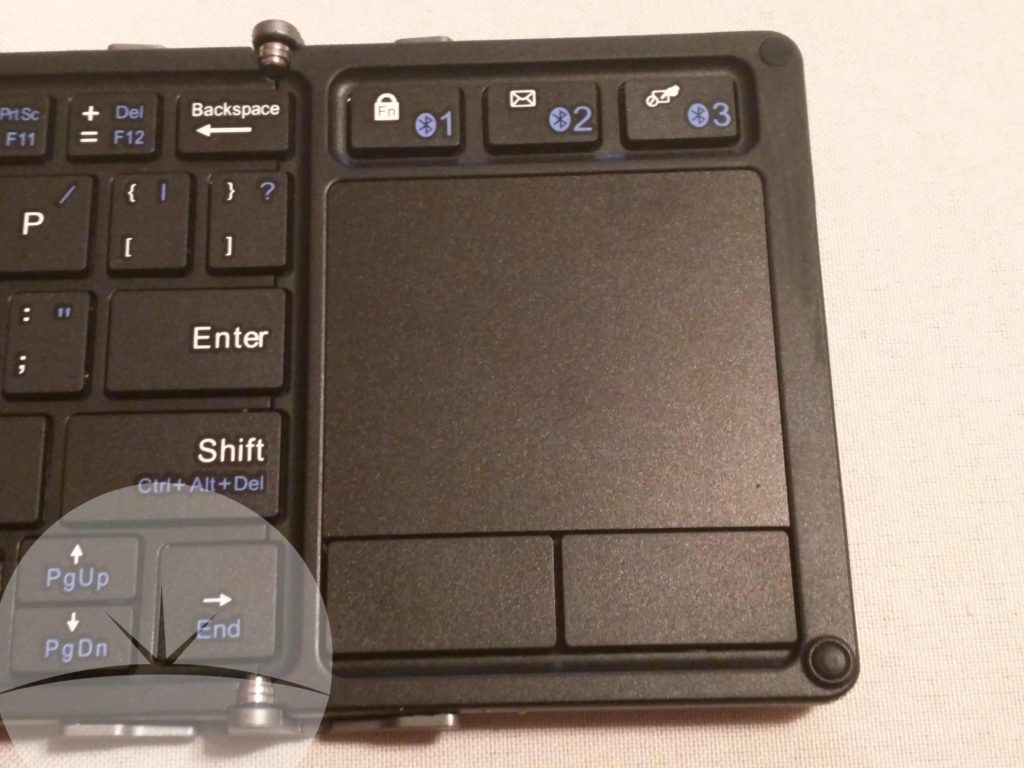 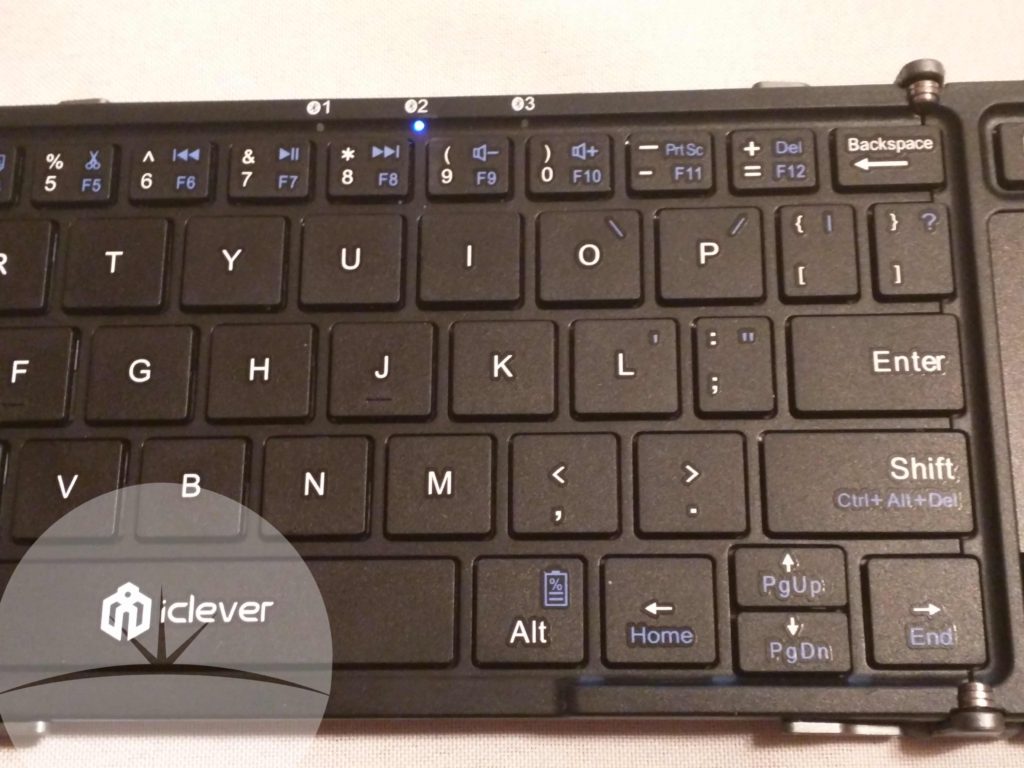 In the end, this keyboard is difficult to score. On the one hand, it’s got great functionality. The bluetooth works like a charm, whether pairing to devices, or switching between them. It’s also got a fully functional mouse pad, that even generated the cursor on both Android handsets of mine. On the other hand, it’s way too small for rote touch typing, while on the gripping hand, it’s down right pocketable because of this. I can say without reservation that, should your hands be small enough, this is a solid choice. But I think most people who touch type will find this one difficult to use, especially at first, and will require a period of adjustment that may or may not ever be acheived. So trying to balance with it functioning as designed, while perhaps the design being the problem, I’m going to score this as a 5. I feel harsh in doing so, but there were too many moments where I simply didn’t want to type on it, despite it working very well otherwise. 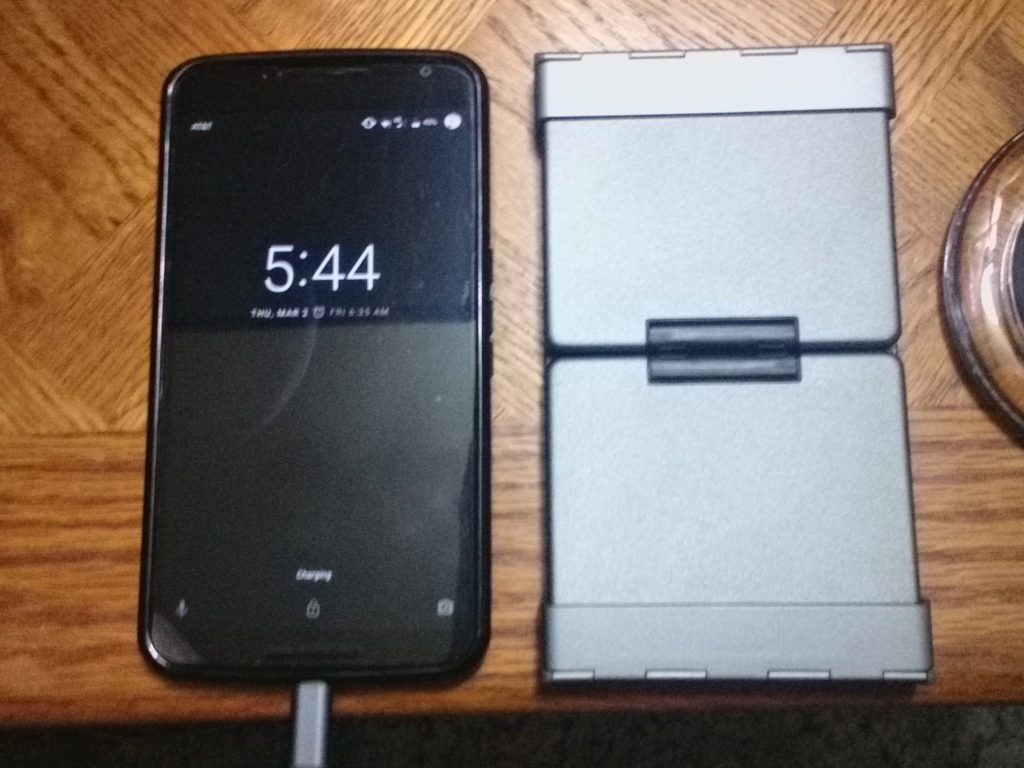 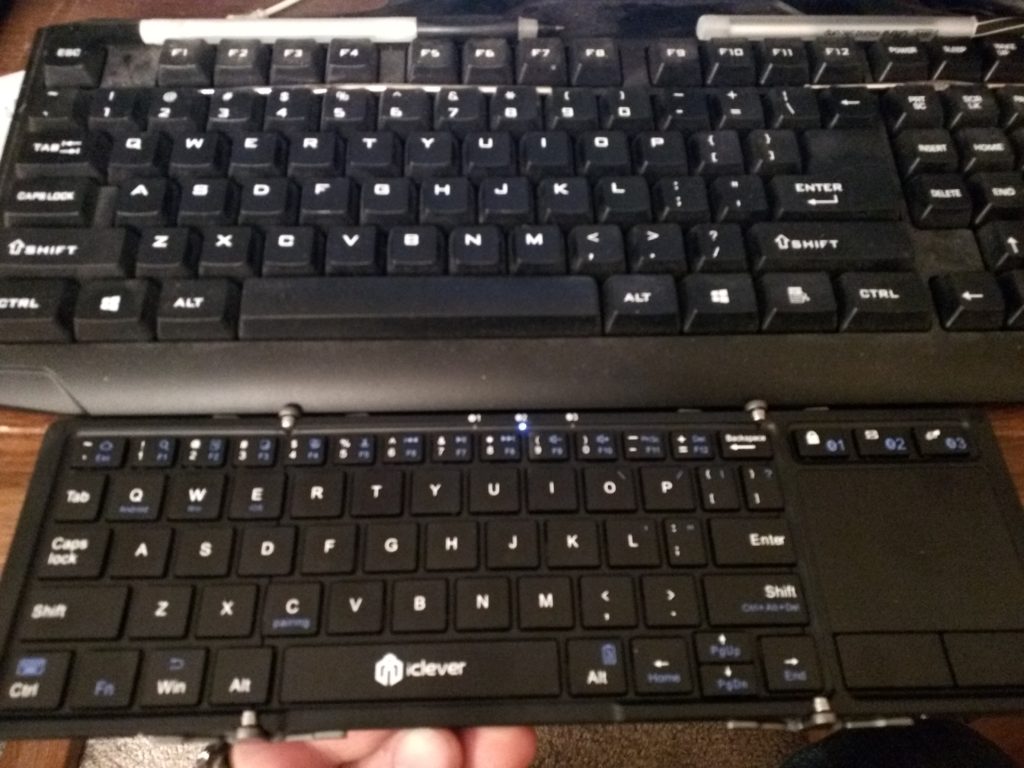