So for the last few days, I’ve been using another one of the wallets from Kinzd. Much like the one that I reviewed a couple of weeks back, this is comprised of two carbon fiber panels, held together by a thick band that comes in four colors. The only real difference between this unit and the other is the slight deviation and shape, which causes the band to fit around the the other way, over the top of the card if you held it to read the name/numbers on the front. 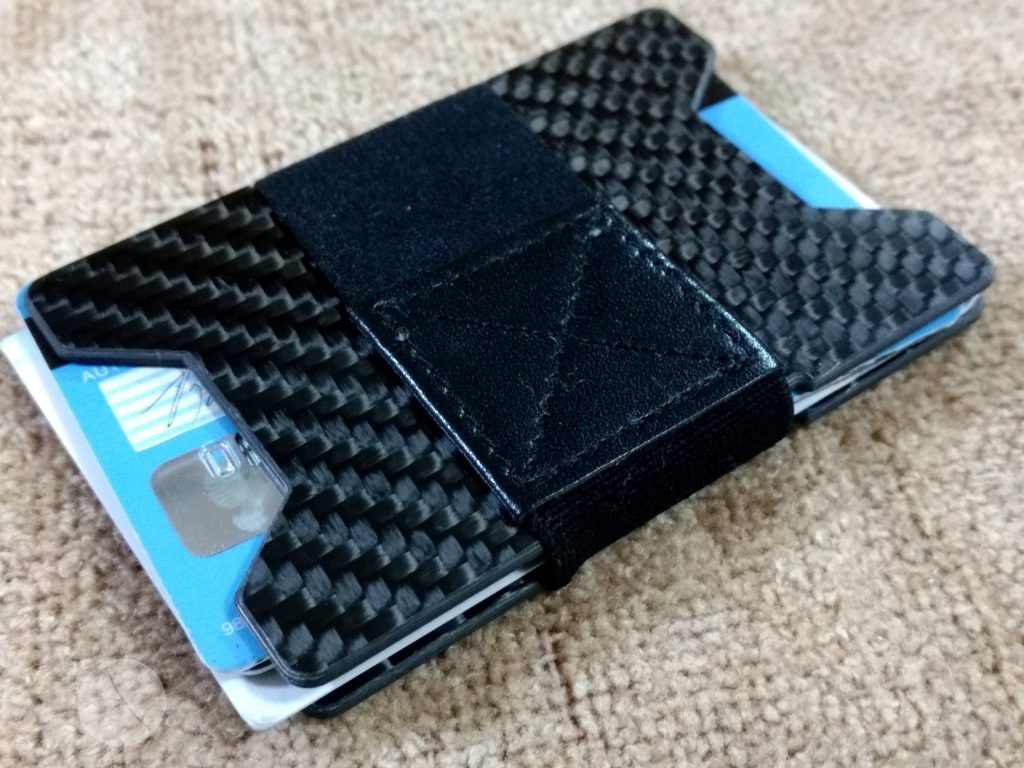 As laid out in the intro, this unity looks nearly identical to the other, save for some minute differences. The carbon fiber panels cover roughly the same amount of space over the cards that are sandwiched in between them, but the cut is slightly different. Whereas the other unit was more narrow on the long sides and only slightly notched at the ends (think like the kind of bone a dog might chew), this one is cut much deeper on the ends for users to be able to slide out a card; the opposing ends are only slightly notched to keep the bands in place. They also come in the black, checkered pattern, and are only held in place by the bands. There are four bands that come with each one: red, blue, brown, and black, though the panels are only available in black. This is another case of form over function. It doesn’t look bad, especially with the black strap, but it won’t exactly turn heads either. 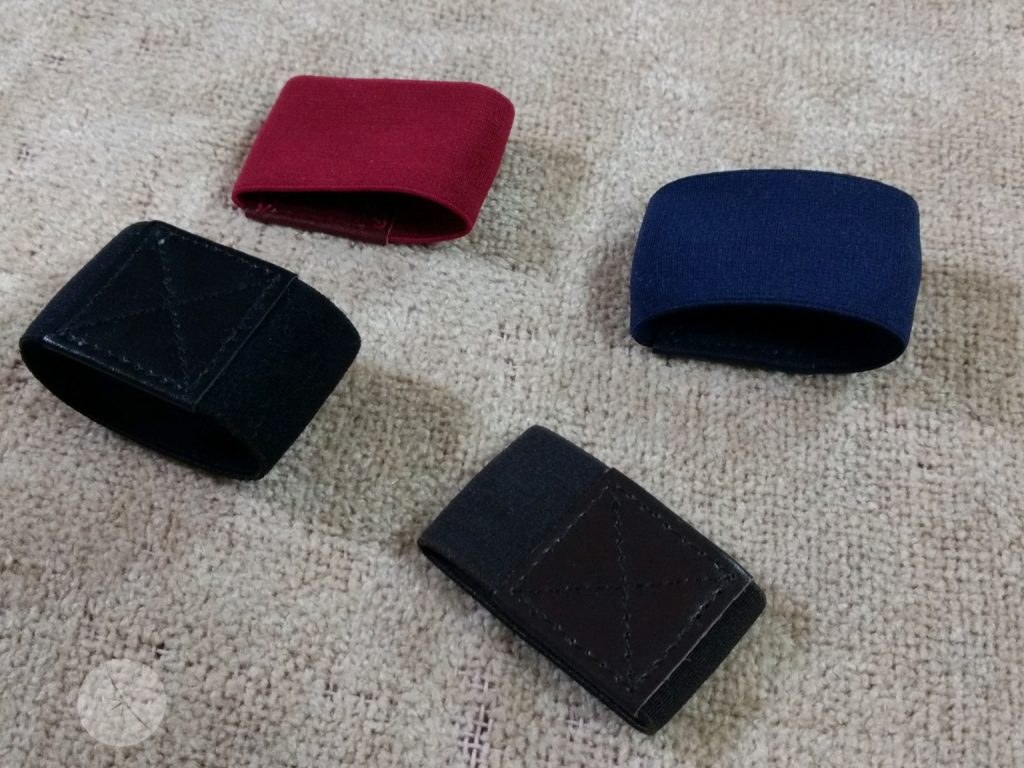 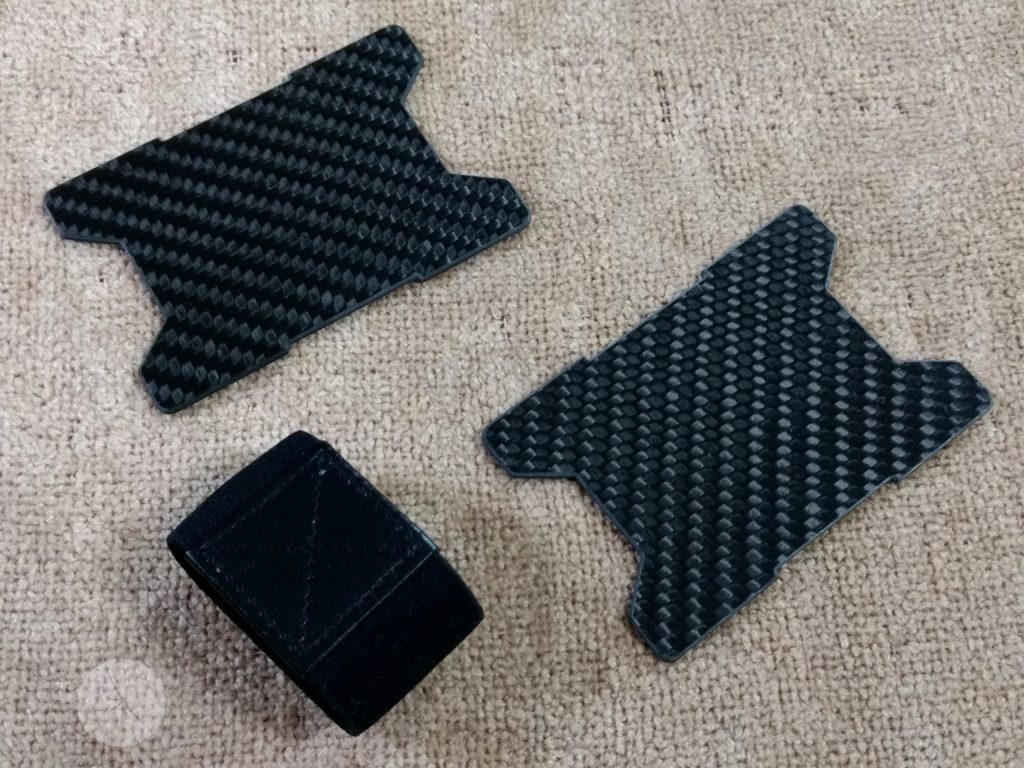 As for function, this wallet tracks with the other one. Users can slide the top most and bottom most cards out fairly easily. Should one want to “dig deeper” into other cards sandwiched in between them though, and that takes a bit of work, as either a panel or cards ahead of the one in question will need to be moved out of the way. The panels do a solid job of obscuring much of the information obscured, and the strap held everything in place in my pocket at all times. Frankly, it felt like a solid, single unit as opposed to several individual cards. Other similar shaped items will also fit in there: in my case I kept my car registration in the middle, though cash in bill form should work as well. And just like the other wallet, these are supposed to be resistance to RFID scans, so badges and other cards that get scanned would sit on the outside of a panel, while remaining underneath the band; I had no way to test the resistance of these panels. 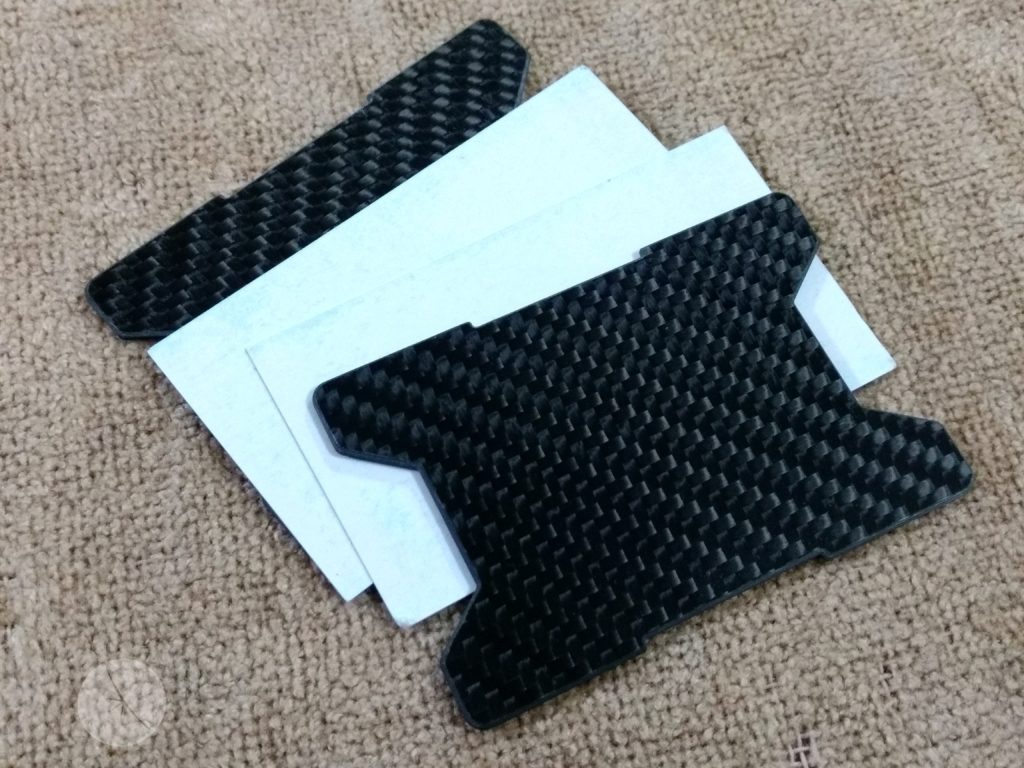 In short, this wallet is difficult to criticized beyond how tricky it can be to fish out a card that’s buried in the middle. While not impossible, it does slow one down when compared to sliding one off of the top or bottom. They otherwise are snugly held in place. The unit is thin enough that it rests comfortably in my pocket without any more of a “bulge” than necessary.. The included band kept everything in place that I put into it, and never once slid out at an unwanted time. So, considering that it delivers as promised, I’m giving this one an 8, like the other one. If you’re in the niche market that this could really appeal to (few bills, no coins, only cards, etc), this is another wallet worth looking at.
Accessories lifestyle
Average User Rating
0
0 votes
Rate
Submit
Your Rating
0
8