Koopower sells quite the diverse group of products that range from a sports watch, to Christmas lights, to this product: a wireless doorbell. My expectations of the unit were not in line with how it performed though, as it was much better than I’d pictured in my head. Frankly, it was both simple and reliable. 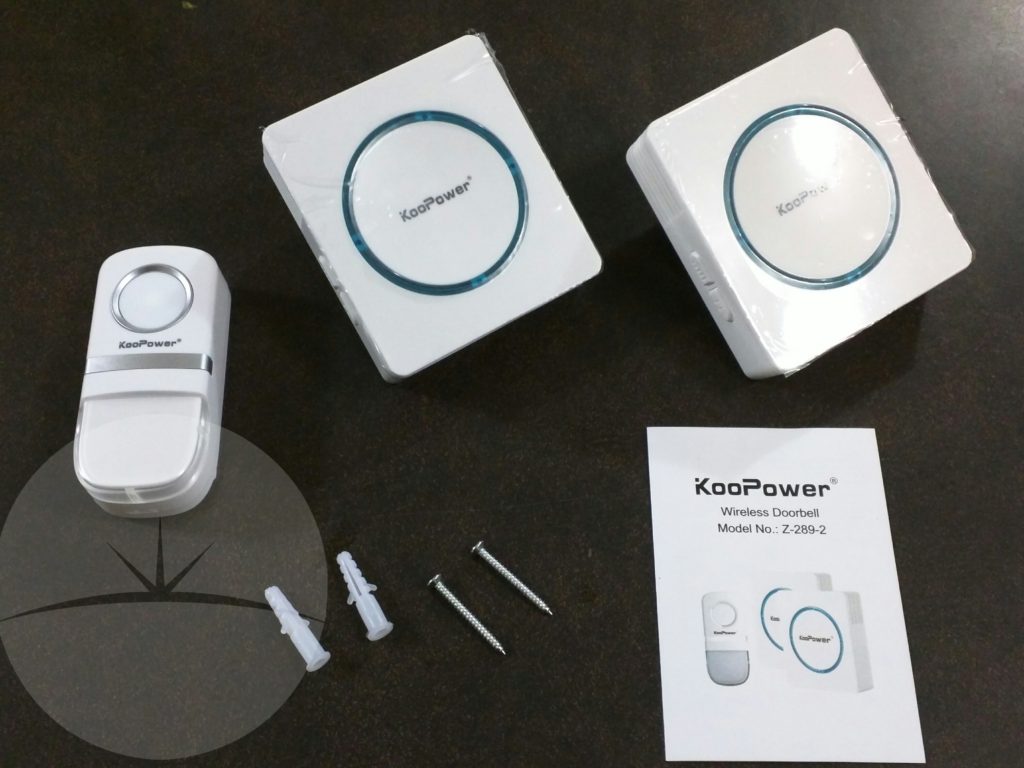 The unit is comprised of three parts, all housed in white plastic, and they are accompanied by stone screws and a 3M adhesive pad. There are two speakers that each plug directly into an electrical outlet, and a button to activate them. They can use some two dozen different “ring tones”, have volume control, and don’t require any pairing with the doorbell proper. There square in shape, and have a blue ring that surrounds the speaker, and a portion of that ring lights up when the speaker is sounding, unfortunately, it’s not the entire ring, but a sole LED. This does look a little out of place, as if the entire ring SHOULD be lighting up, yet it doesn’t. The speakers have two buttons on one side, which cycles through four volume settings, while the other button circles through some two dozen preset “ring tones”. These are comprised of a single door bell tone (in the conventional sense), and the rest being tunes from the public domain. I heard tunes such as Oh Susanna, Jingle Bells, and a bunch others that I recognized but can’t name. They all had a distinct chip tune sound, so users won’t mistake them for anything else. The doorbell button is all white, with a round, button in the top, and a section with a clear plastic cover, where I presume one could put am apartment number or name underneath. 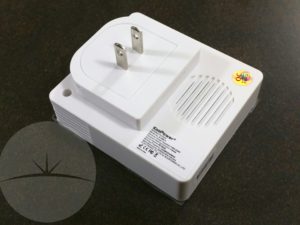 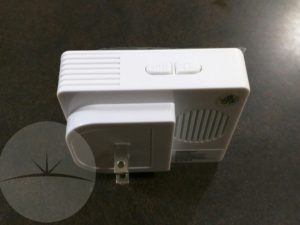 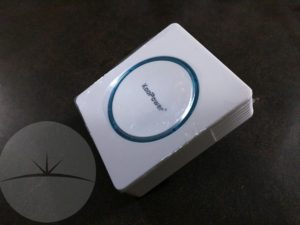 The performance of this unit is where it really shines, and this is so for a couple of reasons that make for a device that works, and is very simple to use. Take the speakers for example. They plug directly into an electrical outlet, and they’re ready to go. No power switch to turn on, no pairing required. The doorbell button is similarly simple. It requires no batteries or electricity, but is completely self powered. I suspect this is why there is some serious clickage happening when it’s depressed, that the high tactile response somehow powers the transmitter. It also needs no pairing to the speakers. You just press the button. In short, this thing is as close to “plug and play” as you’re going to get. The range of distance wasn’t bad either. I left a speaker plugged in, in the house, while taking the button outside. It worked reliably at something in the neighborhood of three hundred feet away. The unit purports a distance that is great (150 meters), though I suspect that all the trees and such may have shortened that some. Still, getting some three hundred feet would be functional in most situtations; I tried most places in the house that I could think of for placing the speaker as far from the front door as I could, and it functioned without a hitch, with the doorbell placed just outside the front door. So for all the “every day” use cases I could throw at this thing, it functioned as promised. 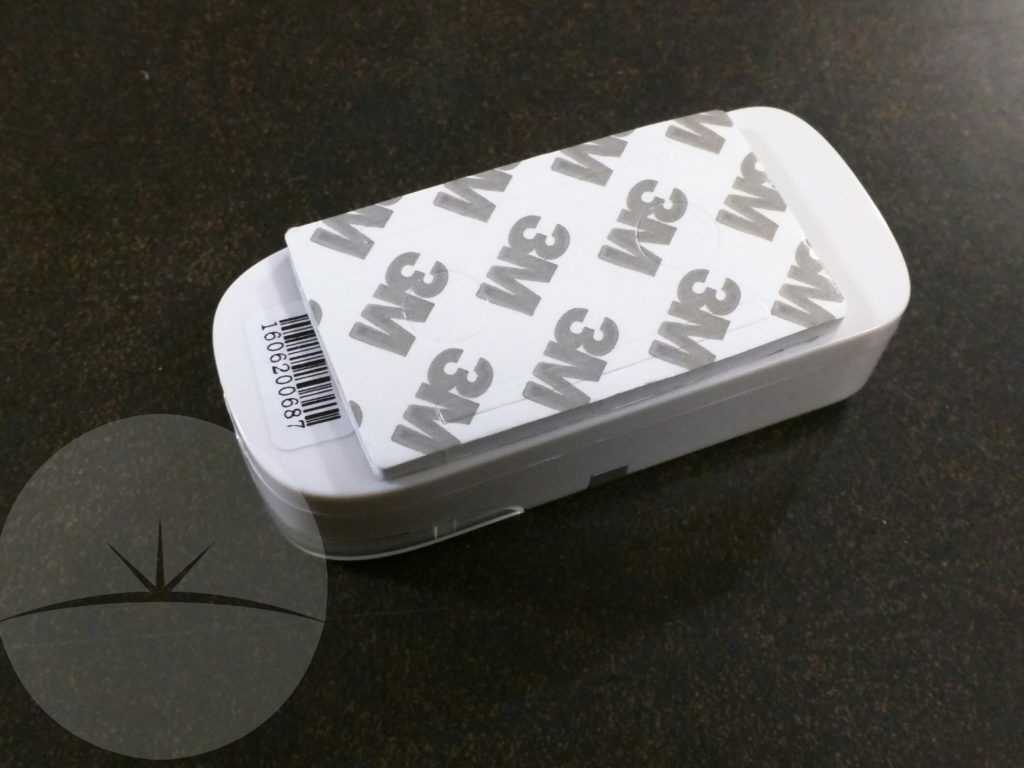 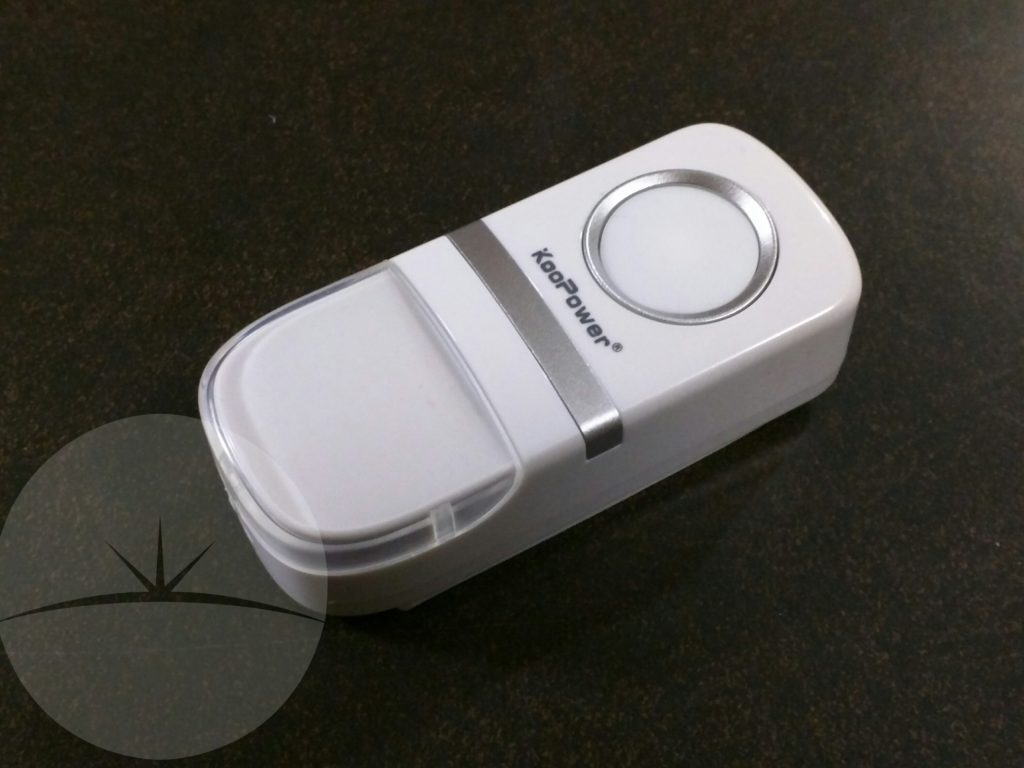 In short, this doorbell is easy to recommend. It’s functional range is more than ample for most homes, and is more than simple to set up, and requires little or no maintainance issues that I can foresee. The only POSSIBLE issue that I can picture, would be if your neighbors purchase the same device. I’m not sure if the neighbor’s doorbell would trip these or not. If you have need of a new or replacement doorbell, this one should be considered. And due to this  ease of use, I’m going to give it a 9.
wireless
Average User Rating
0
0 votes
Rate
Submit
Your Rating
0
9