For the last few days, I have been using the Plugable Bluetooth Folding Keyboard and Case. I’ve use a few of these in the past year, so I’ve had some experience with them, and was delighted at the opportunity to try out another one. Here’s how my experience has gone, so far. 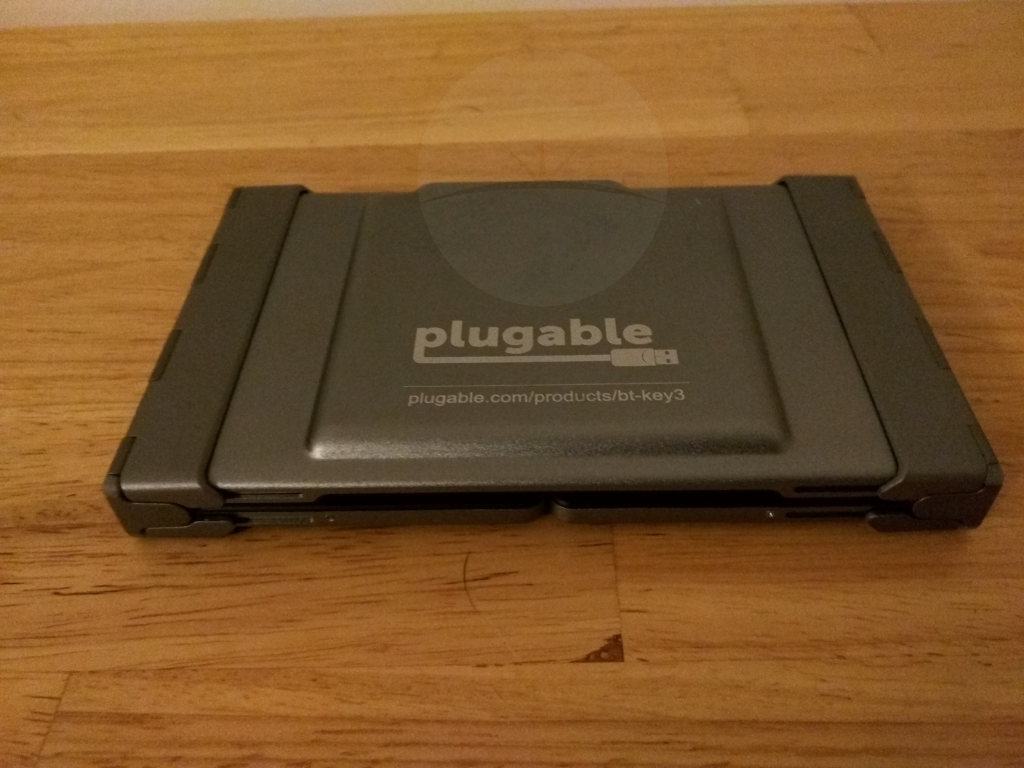 I want to say at the outset that this keyboard has a lot going for it. The design of this keyboard is pretty darn cool. First, it folds open and closed. It’s not hinged down the middle though, like some of the ones I’ve had in the past, that open and close like books. This keyboard has two hinges, each about a quarter of the way in from the far left and right sides respectively, so that they fold toward each other and meet in the middle. I’m not sure if having two hinges instead of one has any practical benefit, but it seems a bit cooler to my eye. When closed, the outside of the keyboard is housed in a stainless steel. I don’t know if it can come in other colors, but this came in a slightly off gray, and just had a nice look and feel to it. Whether its open or closed, the outer flaps are held in place by magnets, so as I bang away on it for this review (and other stuff I’ve written), the hinges aren’t loose and the ends aren’t moving or flapping about in any way. It feels like it’s a single, flat keyboard as I type this, as well as looking like one. 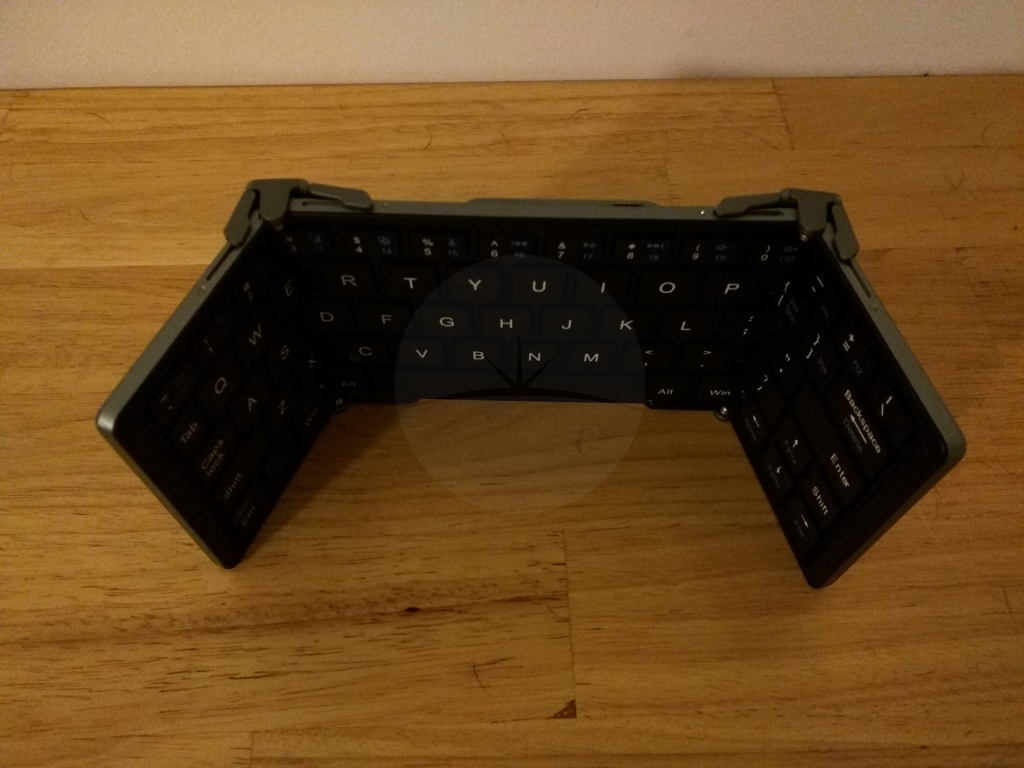 There are no large gaps between keys where the seems are located, but instead all the letter keys are spaced evenly, to the point that the seams from the hinges aren’t noticed when it’s opened. When it’s opened, the stainless steel side faces downward. While I haven’t noticed it sliding about, there are no grips or bumpers that face outward and help prevent it from sliding. I’ve used it on both a leather surface, as well as hard plastic, and not had much trouble in either scenario; your mileage may vary on this. The keyboard is powered by a rechargeable battery, and can be powered via any micro USB cable, whether it’s the included one or not (though their site stipulates that the included cable is only good for charging, and won’t do data transfer or any other non-charging functionality); no transformer was included at all. 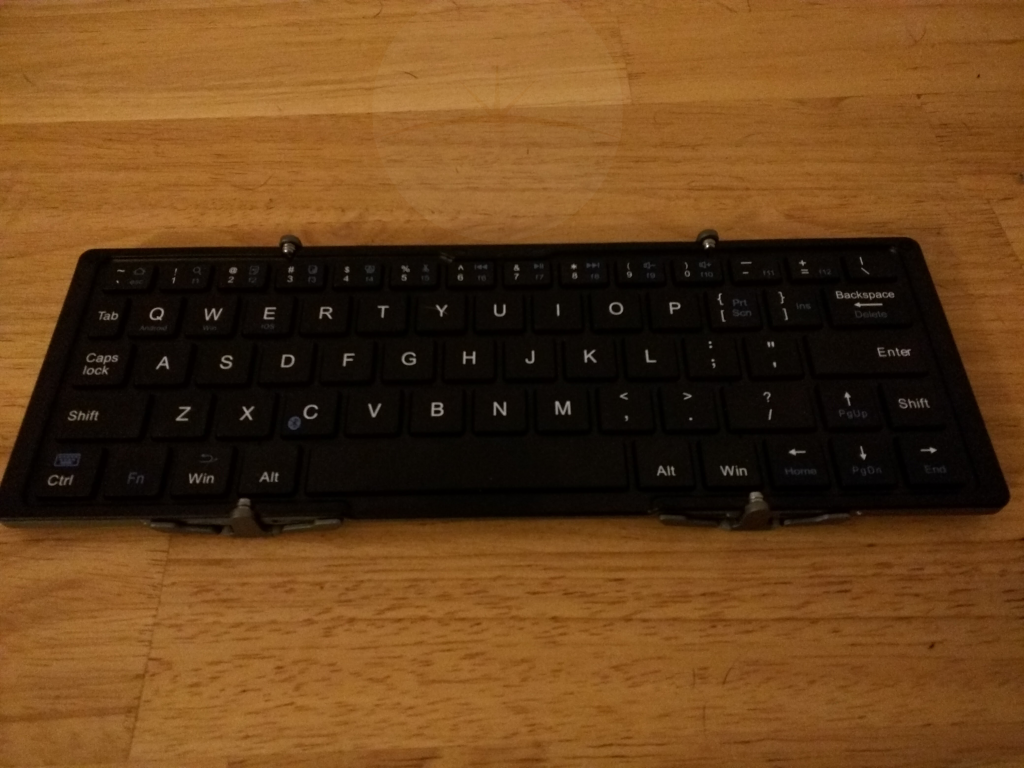 The side with the keys are all in black, with primary functions such as letters, numbers, commonly used punctuation, and the like, are all in white. Secondary functions are quite common on keyboards such as these, and this one is no exception. Listed in blue and activated with a function key labelled as “Fn”, this is where users would go to pair the device (more on that later) activate conventional function keys ranging from F1 to F12, or use things like the home and search functions; holding down the “Fn” key just like using Shift to capitalize is all this takes. Plugable’s website brags up the keys, and for good reason. They are engineered to have the same type of tactile response as one would find on a laptop, and that really shines through. These click nicely, and have a good amount of feedback; I’m not left guessing as to whether or not I’m “making contact” when I’m hitting a particular key. All of the necessary keys for writing (Shift, delete, tab, ctrl, caps lock, backspace, enter, directional arrows, and sundry punctuation) are all there in white, as well as a full row of numbers, and all of which function as one might expect in the Android ecosystem. And speaking of how it was engineered, from top to bottom, this thing feels solid. It has a decent heft to its weight (308 grams/.7lbs). I won’t have any long term experience with this device for this review, but this keyboard has a feel to it that just says “solid”. If how it feels is any indicator, this thing feels like it will hold up for a long time with regular use. There are both Alt and Win keys (in white) as well, though they function in ways that one might not expect. The former, when using the keyboard popus up the list of stock emoticons, which will disappear after a while if not used. The latter, when pressed, activates the swipe-up-from-home gesture that brings up Google Now on devices not using the Google Now Launcher. This keyboard is designed with multiple OSs in mind, so it will work with Windows and iOS as well as Android. Because of this, not every secondary function listed in blue will work. Their website does a good job of listing out what functions on the keyboard are unique to each OS. 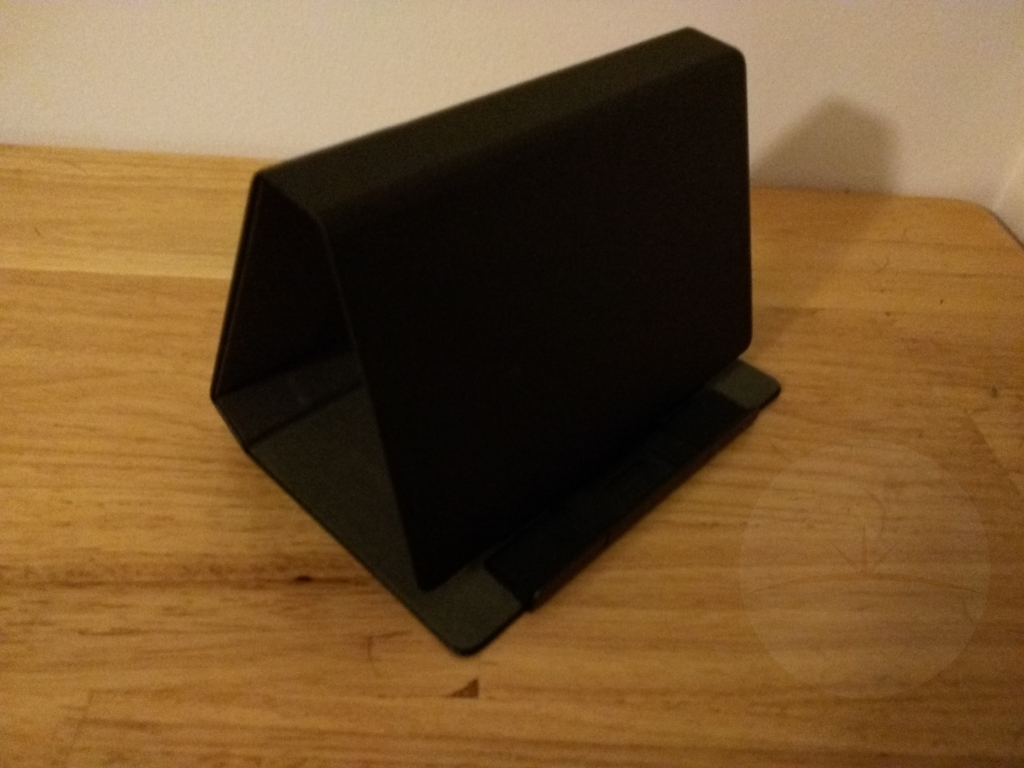 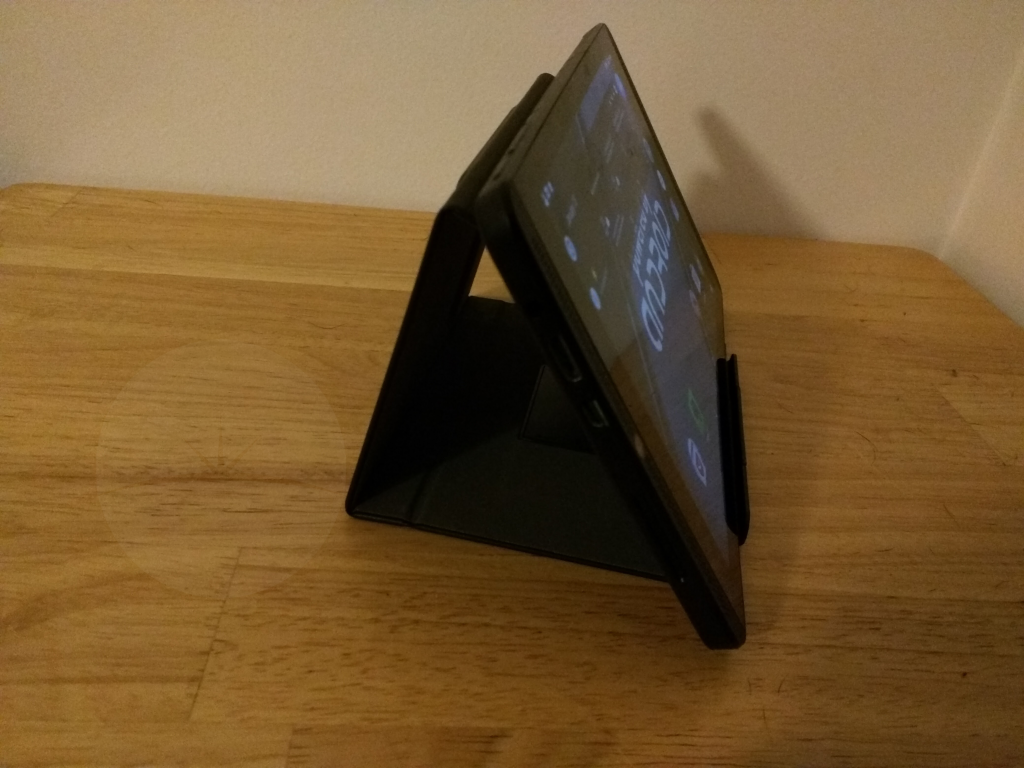 Pairing the keyboard was the easiest of any wireless keyboard I have used. Once I got my NVidia Shield into discovery mode, I hit Fn + C (which activates the Bluetooth pairing for the keyboard), and the rest was automatic. No codes or passwords were necessary. There’s a green light near the top (and slightly to the left) that confirmed it was a paired, and I was off and running from there. What really impressed me was this keyboard doesn’t have an on/off switch. You open the keyboard, and (provided I have my Bluetooth turned on) it will connect automatically for me. When I close up the keyboard, it disconnects for me automatically. I can’t stress enough how nice this feature is. I don’t have to give it a second thought, I just open it up to use it, and close it when it’s done. For me, this is a real selling point. Like I mentioned above, I’ve used three or four different models in the last few years, and all of them had a physical toggle. It was an additional step that this company simply did away with. Kudos to them. 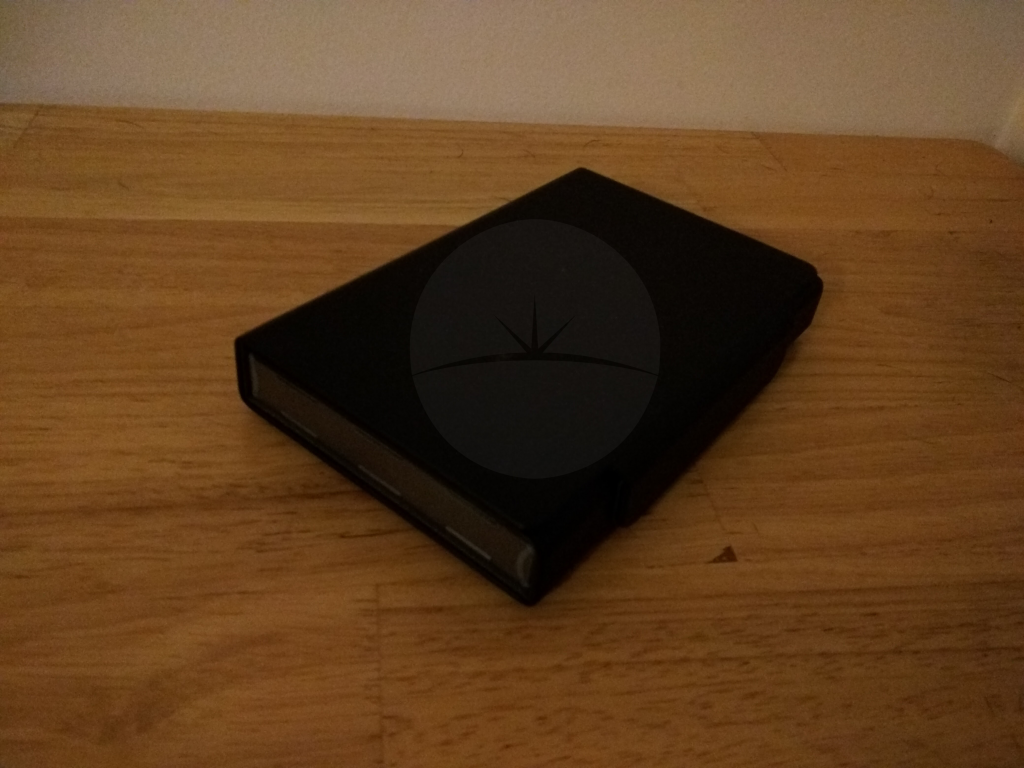 They keyboard comes with a sort of case. It doesn’t house the folded keyboard completely, but rather it wraps around the keyboard, leaving the sides exposed, and prevents scratching on the stainless steel exterior. What’s nice about it though, is that it doubles as a stand for a mobile device, when it’s folded a different way. I was unsure about how well that would perform for my tablet, but it does just fine, even better than the cheap folio case that I have for it. It also has magnets built into the case that keep it closed when the keyboard is inside of it. Another point in the plus column for this keyboard.
On the whole, there’s a lot to like with this keyboard. I wish though, that I could say that I liked everything. Here’s the part that was tough for me: its size. On Plugable’s website, they say that the keyboard is slightly smaller than what one would find on a standard laptop. While that may be the case, the size is the one negative takeaway that I have, and it absolutely hit me when I first went to type on it. I’m getting more use to it, but it would be a grave disservice were I to skip this, or even not stress the point. As one who has been touch typing for close to twenty years, the size of the keys impacts their placement as it relates to proper touch typig, to say nothing about how the secondary buttons (shift, enter, caps lock, etc) get wedged in to the smallish, rectangular form. Looking at the keyboard, either in pictures online or right in front of me, it looks like it would be large enough. Yet in practice, it takes getting used to, to say the least. As it stands right now, my thumbs tend to bump up against each other, and I sometimes reach for the wrong key via muscle memory. In order to type accurately, my hands need to be adjusted from the normal resting position, and held close together and have them also rotated so the palms face slightly inward and the backs of my hands slightly outward (if you can picture that). After spending some time with it, it’s not as bad as it was when I first got it (I would’ve bordered on buyer’s remorse for day 1), it’s still not as comfortable a feeling as I get on larger keyboards At first, I couldn’t just type. I had to THINK about typing, instead of letting words flow through my fingers. As it is, I still have to correct for typos that stem exclusively from the size of the keys, and wouldn’t have occurred on a normal keyboard. Accounting for all of that though, I can technically touch type on it, so there’s that. 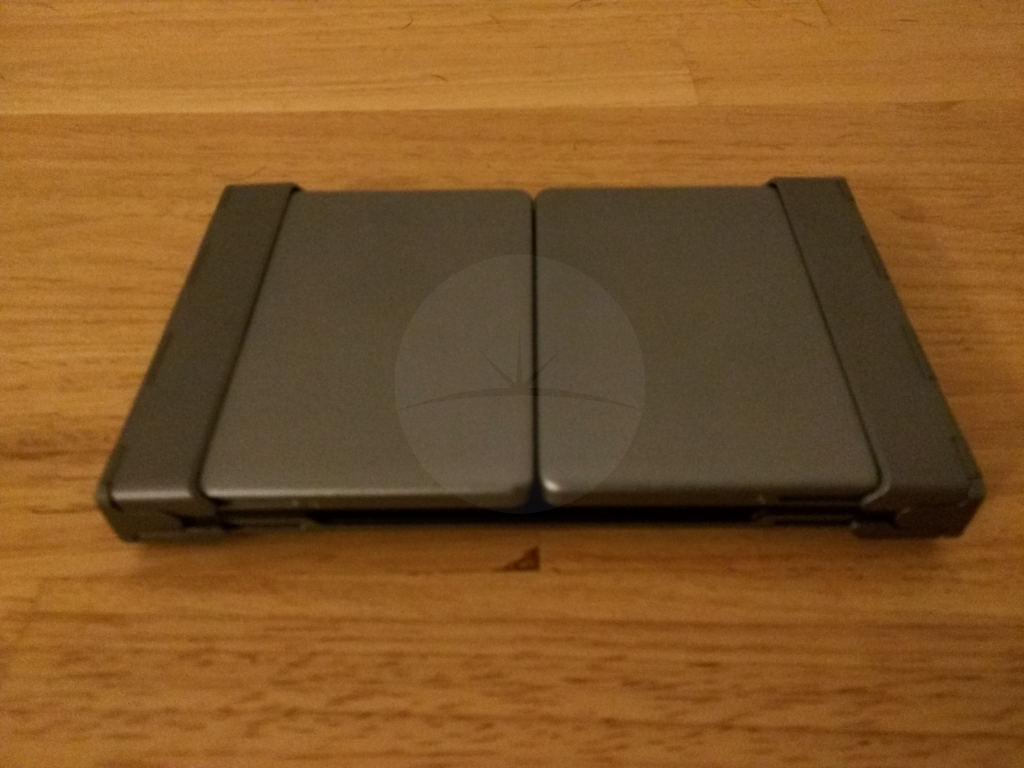 As for recommending this to someone (or warning a prospective buyer off), it’s difficult. There are so many things that this keyboard has going for it. It seems well built, feels sturdy, looks slick, has a nice cover that doubles as a reliable stand, and pairs and connects effortlessly. But, the thing it’s meant to do above all else, which is to provide a way to type, doesn’t quite measure up to the same level that everything else on this keyboard is able to do, and do in spades. I feel like I almost have to give this two scores: a nine or ten for design and build quality, and about a four when it comes down to practical usability: it can be done, but takes some “getting used to”. Were I handed some cash to go and buy another Bluetooth keyboard, and have already spent time with this, I’d definitely get something larger, that is actually full size, favoring comfort above the convenience of something so compact. But at the same time, I’d legitimately worry that whatever I would replace this with just wouldn’t be as nice. Given how many I’ve used as of late, that’s not difficult at all for me to picture. Were this built a mere couple of inches larger (maybe even less), it would have gotten a perfect ten from me, without any hesitation. There really is a LOT to like about it. But given the challenges that its size presents for touch typing, it’s a far cry from perfect. I’ve wrestled with the score for a few days at this point, and what I score this as, I do so grudgingly, bordering on cognitive dissonance. For users who don’t care to touch type, this is a great keyboard. For those of use who do touch type though, it’s the quintessentially bittersweet tech. So I am forced to give this a six. Plugable site