Released by Liquidum Limited, Rocket VPN is an app that enables use of a Virtual Private Network. There are a couple of advantages to using VPN, such as having your traffic encrypted while using a public network, or getting around geo-fencing. I’ve spent some time with Rocket VPN, and here is how my experience went. 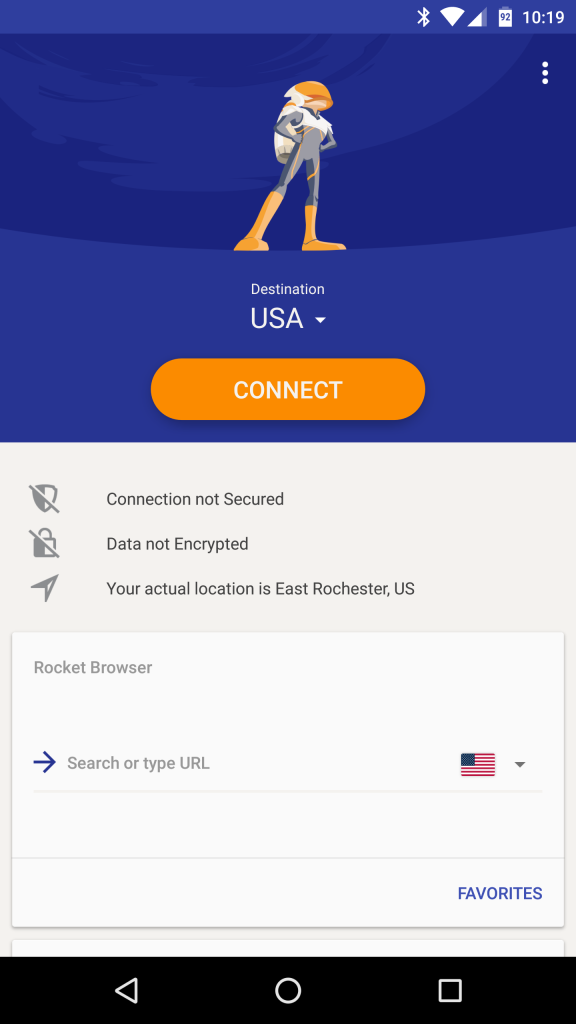 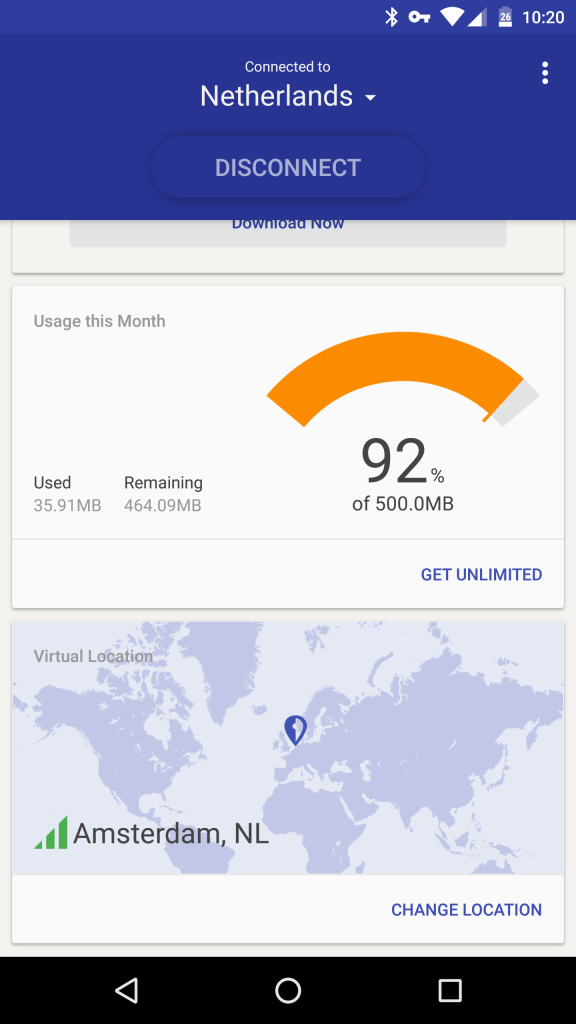 The first things I noticed about the app were the visuals. The app’s information is partitioned off into cards, in a Material Design-esque fashion. The coloring is bright, with a heavy emphasis on blue, orange, and white. AT the top is something of a mascot, an astronaut wearing a jetpack or some such, and just below that are both a drop down menu showing which countries are available to route traffic through, and button to connect. Each county in the drop down menu has an icon to its left, that is shaped like the signal strength on a cellphone, and colored in either Green, Yellow, or White/Light Gray. This coloring system is to indicate quality of service, with green being the best/most reliable, and the service degrading down from there, to the other colors. In my case, Japan was yellow, and gave me a painfully slow connection of less than 2MB down. Singapore’s icon was listed in light gray, and I was unable to connect at all. While it wasn’t spelled out in the app (that I found), one can reasonably conclude that those colors are a shorthand for the quality of connection. Scrolling down a bit, there’s an in-app browser, for those electing to browse the web right from within the VPN app. While I can’t picture this making much difference in geo-fencing, I could see this being more secure, as users are then not going outside the app for a browser which would provide one less place through which data would travel. For the security minded, this is a nice feature. The app even goes so far as to list out favorite URLs that users can pre-load into it, as well as an option for “last visited”, which will again fire up the most recent query or address. 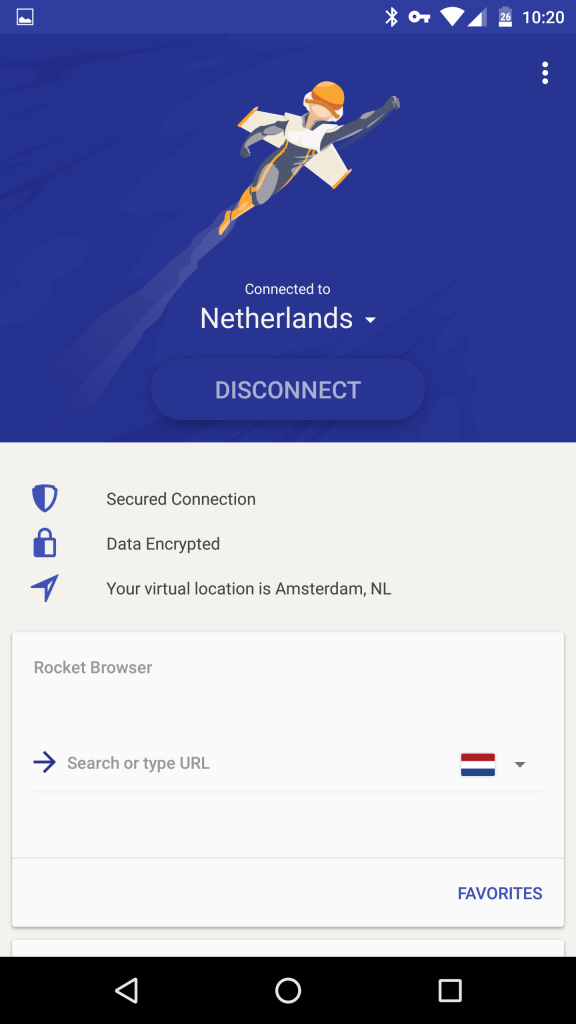 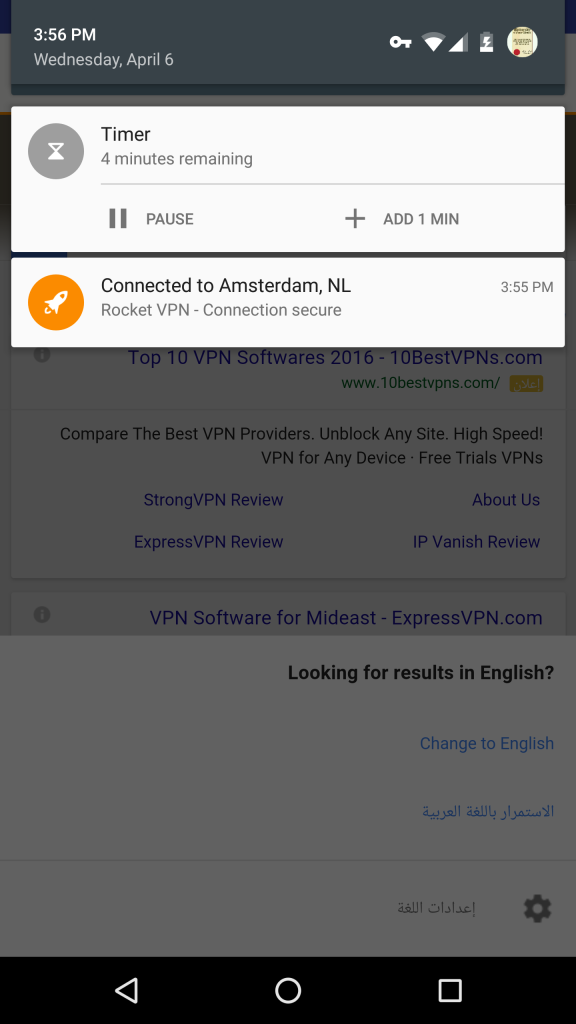 Below the browser, are app shortcuts. The app allows six shortcuts to be created to favored apps, with three of them pre-loaded. In my case, I saw Facebook Messenger, Chrome browser, and Youtube; below those were three blank icons that I could fill with my choosing. I’m not sure why I couldn’t also customize the top three, but there are no visual cues to indicate a way to do it, if it can be done at all. On the other hand, what was nice about these shortcuts was that I could select different servers for each one. I could have the app route all my Chrome traffic through Sweden if I wanted, while routing YouTube through Germany. This is especially handy for getting around geographic restrictions. Once a country is selected, your internet traffic gets sent to the servers there first, before venturing on to its destination, and will route through there before returning to your device. Thus, were I inclined to get around a geographical restriction in the US, I would opt to use Rocket VPN’s servers in the Netherlands, and every site I go to would assume that’s where I was located. I ran a couple of casual tests using Speedtest.net, as I figured that would be impartial and remove any mistakes inherent to the “eyeball test”. On two different nights, around the same time, I ran the test once without the VPN to establish my baseline. Without the app, I was getting around 16MB down, and 1.5MB or so, up. I fired up the VPN, and chose American servers, then ran Speedtest.net for a second time. I started pulling down a speed that significantly lower, ranging from as low as under 6MB down, to 9.81MB down, with a couple in between. On a lark, I selected the Netherlands for another test, to see if the performance would be equally as poor. Much to my surprise, it fared noticeably better. The first night got me north of 19.5MB down, and over 22 down the second night. Clearly it makes a difference which server I was on. Should you end up choosing this app for your VPN, hop to a different server if you notice unusually poor performance. 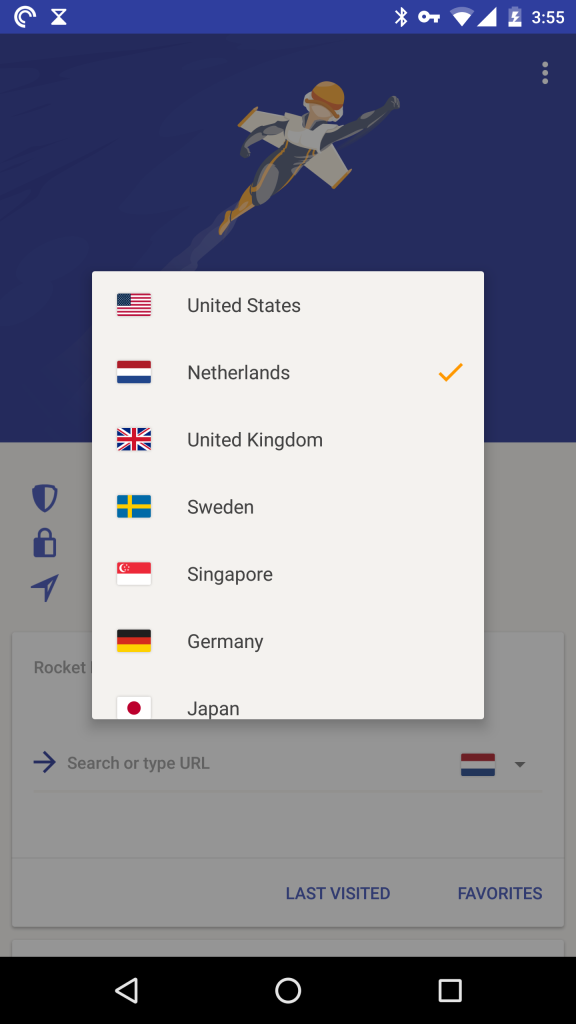 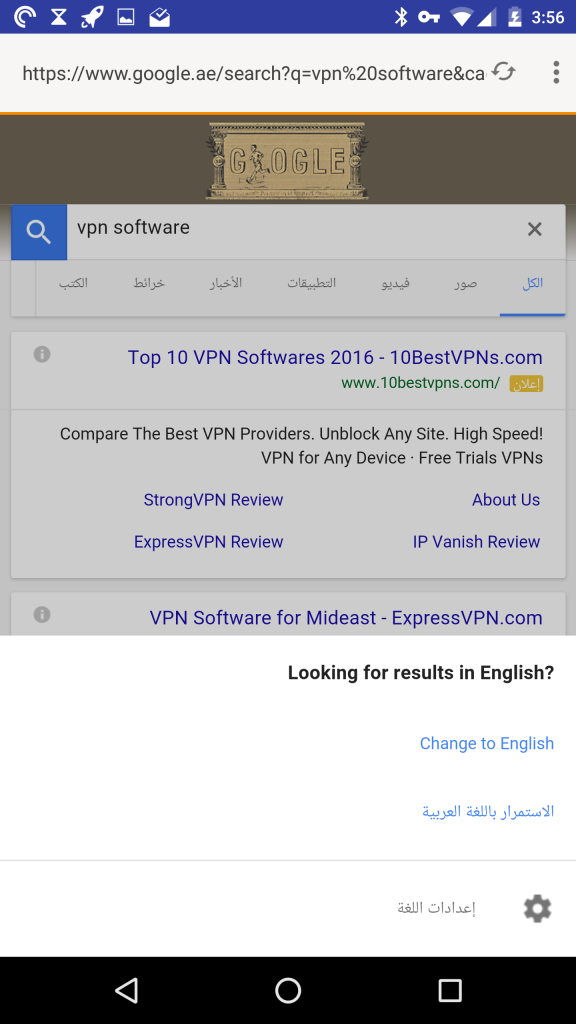 To round out what’s left in the app, there is a single card that serves static ads. There’s a meter to show how much free data is left for users; each month, users are allotted 500MB to use, sans any rollover. And at the very bottom is a map, with an approximates of where the server is located, through which a user is routing traffic. The large meter makes for glancable info but the map doesn’t strike me as all that useful. The pricing on this app isn’t too bad either. A single month of unlimited access is $3.99, while a recurring fee is $2.99 a month or an entire year for $24. All of these remove ads, and let me tell you the ads are aggressive. At times they pop up onto the screen for four successive taps. They are either full screen, static images, or rolling video like one would encounter on YouTube. Above all, they are frequent. I never begrudge a developer from making a living, as it’s not easy. But I would be remiss if I failed to mention the negative experience I had with these ads. I have used other VPN applications, and I have never seen as aggressive a form of advertising in a VPN app as I have seen here. Now Rocket’s pricing tends to be at the lower end of what I’ve seen in other VPN apps, and again subscribing does remove the ads altogether. But with this being my initial experience with this particular app, it did give me pause about subscribing. Take that for what you will. So here’s my recap. The visuals, while colored a bit bright for what I’d like to see, largely make sense in their layout. It contains a few features that I haven’t seen elsewhere, like predetermining specific locations on an app by app basis, or having an internal web browser. I was put off by the ads, but the pricing is quite reasonable, so the ads shouldn’t be an issue for paying customers. Were I a subscriber, I’d give this a higher rating than if I were just using the free service with ads. Trying to balance the two into a single experience, I’d give the app a 7, as it is more useful than others I’ve used, and cheaper to boot.

Rocket VPN can be found here THIS LINK