The Qi technology standard has been around for a fair few years now (2008/9), but as with almost all new standards it has been relatively slow to filter out into the general population. As such the adoption of wireless base stations has been relatively muted throughout most of the western world, but with more and more manufacturers integrating the technology into their flagship devices it is becoming more likely that we’ll start seeing them in our everyday lives. Zens are a company that focus entirely on Qi with their entire product range geared towards the technology, so it is no surprise that they’ve been one of the first to aim towards an even smaller market – households with 2 Qi integrated devices.

Coming in with a RRP of around £70, (Clove Technology stock the product for £55) there are considerably cheaper ways to charge your devices, but with the Zens you have the convenience of never having to ferret around in the dark for a USB cable to plug into – you can leave the pad on the desk or bedside table or anywhere else you choose to put it and stick your Qi device on it when it suits you. At least that’s the theory, the reality as I found out is quite different. 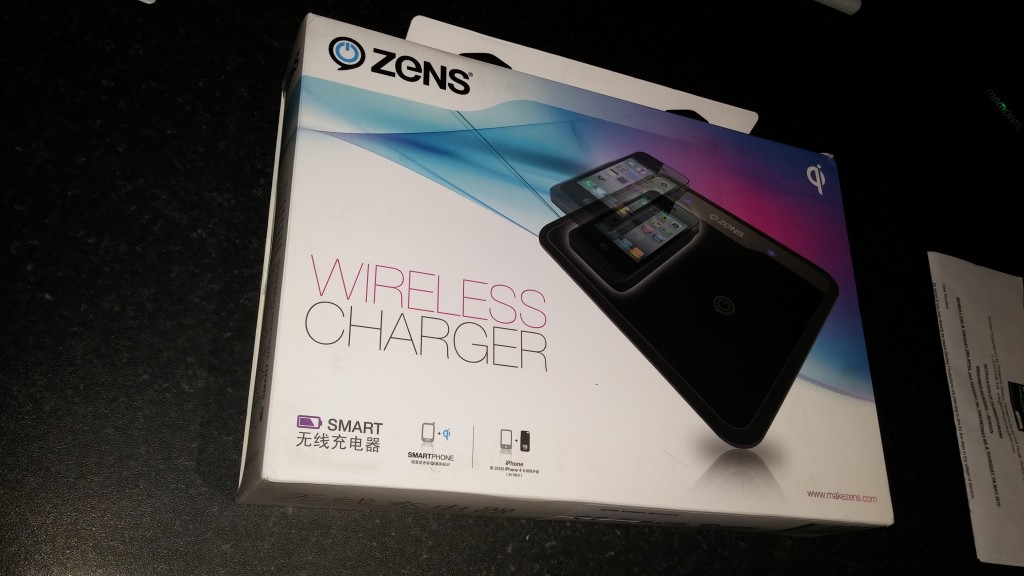 Unboxing the Zens Charger isn’t an unpleasant experience by any means, but compared to some devices in the mobile world today it isn’t exactly memorable either. The Charging pad itself comes in a standard bubble wrap pocket with one side of the box holding the plug and power cable. Other than two booklets – one of which is entirely in Chinese, the other which assumes you are only ever going to use the Charger with an iPhone4 – this is all you get. Once unwrapped, the Charger itself has a reasonably high quality look about the charging surface, but the product itself is quite lightweight and feels a lot cheaper than the £70 price tag should warrant. It has non slip feet which aren’t brilliant but they should stop it sliding off a work surface without a deal of force being applied. After a while that pristine looking surface also seems to scratch if you so much as look at it. Over the space of a day and without moving it from it’s slot on my desk it has several dozen tiny marks on it. I can only assume these came from specks of dirt on the back of my devices, but to my mind a station designed to have things placed on it should be a little more robust than this one is. 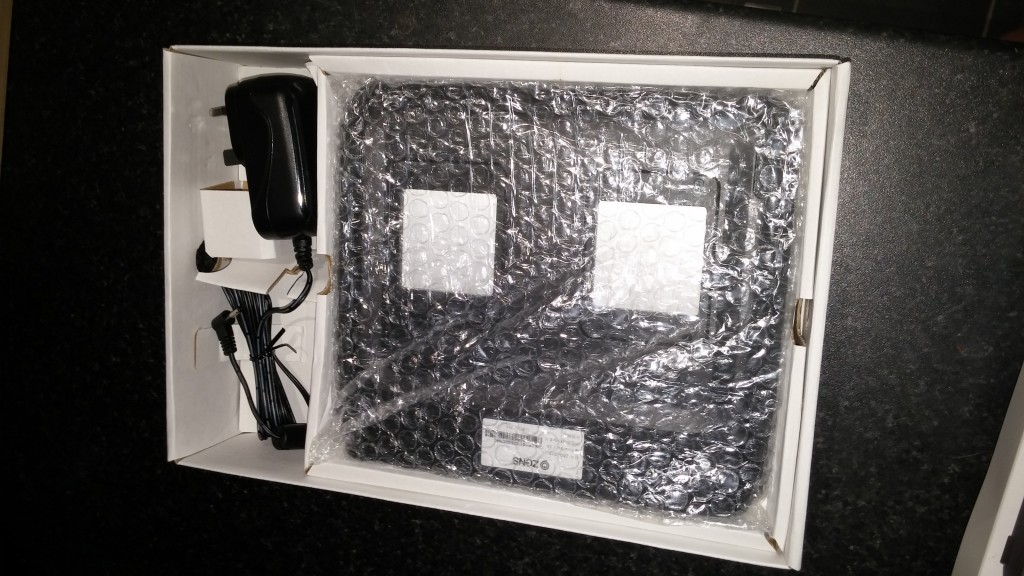 The key part of any charger though is of course it’s charging power, and this in my experience is where the Zens Dual Charger is weakest. To test I used two Qi devices in the shape of my LG G3 and my fiancee’s Nexus 7, and one non Qi device in her Samsung S4. Starting with the LG G3 by itself I struggled to get the wireless charge to hook up for more than a few seconds at a time. The Charger has a weak blue LED under the grey border which tells you when a charge connection has been established, and with the LG G3 this was flickering like a candle in a Force 9 gale. In short, I repeatedly had to shuffle the phone around millimeter by millimeter in order to get it to charge – though when it did connect the results were fairly impressive. 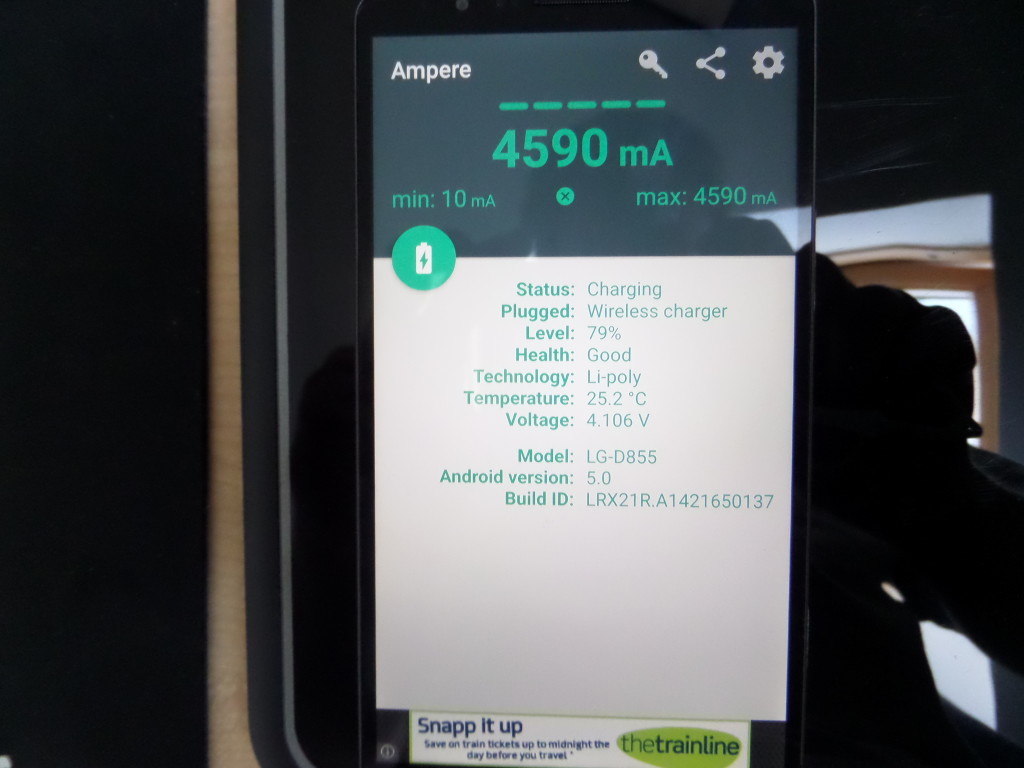 The speciality of the Zens Dual Charger is however dual device charging, so next to the struggling G3 I placed the Nexus 7. Immediately it became obvious that the Nexus 7 has far fewer issues establishing a decent connection between itself and the Charger as it lit up and began charging. Unfortunately I wasn’t able to see whether or not the Charger’s LED lit up as the Nexus covers it, but I’ll assume it was shining away underneath. As ever with this article though there is a downside, and with the Nexus 7 this was in charging speed. While it can establish a reliable connection, the power of said connection is woeful, capping out at around 300mA. All the while next to it the LG G3 continued to struggle. 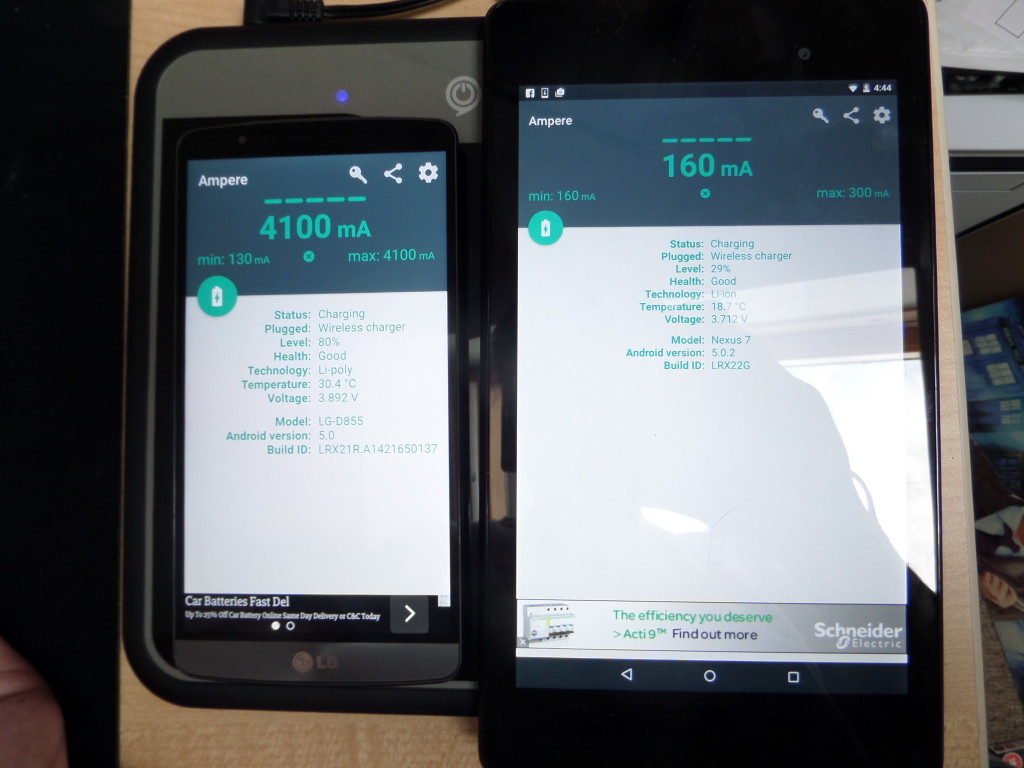 Hidden around the back of the Charger is a USB slot. With the instructions mostly in Chinese I assumed that this was in order to be able to use the station as a charging point for any non Qi enabled devices you may have, a nice touch considering it’s using up valuable wall socket real estate. With the Samsung S4 attached, I got just as intermittent a signal as I did on the Qi pad with the LG G3. Quite how this is possible with a wired connection I’m not certain, considering the very same USB cable charges rapidly and reliably from a standard 3 pin to USB adapter. To make matters worse, when I then placed both the LG G3 and Nexus 7 on the pad with the Samsung S4 still connected, none of them would register any charge at all. 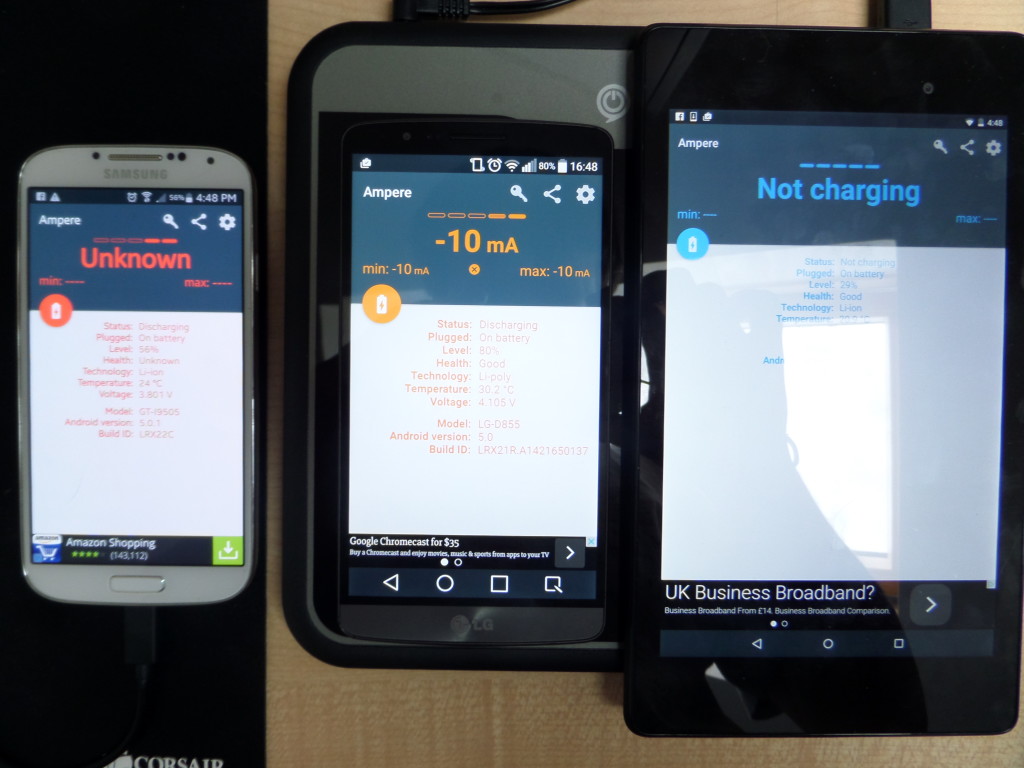 The Zens Dual Charger is a very nice idea, implemented very poorly. Perhaps the fact all of the information around it solely talks about the iPhone4 means it only works well with the iPhone4*, but if it does then it isn’t really a Qi device, it’s an iPhone4 accessory. Hopefully someone else will pick up the idea and make a better job of it, as with more and more flagship phones and tablets containing Qi technology it will make our lives easier and faster if we can have somewhere that charges all of our devices in one go without the need for cables or precision placement. Unfortunately, the Zens Dual Charger is in no way that device.

You can purchase the Zens Dual Charger below;

*iPhone4 would need a QI case to work with the Zen charger as it doesn’t come with it built in. o.O