Kingston, the manufacturer of storage devices, came out with a shocking headset last year when they announced their new product HyperX Cloud. It was a good headset considering the background of the company, which is not audio-related at all. After the release quite soon the next-generation Cloud II headset was announced as well. The new headphone brings everything good from the previous version and enhances it with some quality of sound improvements including 7.1 surround sound for extra immersion. In the end, Kingston managed to come up with a, for gaming, a very good sounding headset, which is extremely comfortable for long periods of use. Although, it is lacking in customization options and has no software to tweak the audio even more, however, the price point makes up for this with the HyperX Cloud II being priced just under $100.

The Kingston HyperX Cloud II headset is very stylish. This, in our opinion, makes this headset one of the best looking ones in its price range of under $100. Features different color combinations including and not limited to red and black, blue and black, black in silver, etc. The ear cups can be moved back and forth for a comfortable fit. They are also attached to a sturdy metal casing, which can be moved up and down to fit any sized head. The earbuds are made of leather by default, however, the headphone comes with cloth extra buds as well. It is decorated with HyperX logos on the black of each speaker as well as top leather padding of the headset, which is covering and holding it on top of the head.

The Cloud II’s detachable microphone extends in front of the headset and features a flexible but rigid cable as well as a large foam tip. As it was already mentioned, the microphone is fully detachable transforming the headset into a very cool looking headphone. One of the most important factors is that it does not stand out too much if one decides to use it outside while doing any kind of activity. The headphone is by no means designed to be used under a heavy sweaty environment, however, it handles rapid movement well and stays on the head without any problems.

Kingston’s HyperX Cloud II comes with a USB dongle, which controls microphone volume, and device volume, as well as a switch, to toggle 7.1 surround and a switch which mutes the microphone. The plastic dongle has a clip that can be used to attach it to the piece of clothing. The headset can be used on any console using its 3.5mm jack. 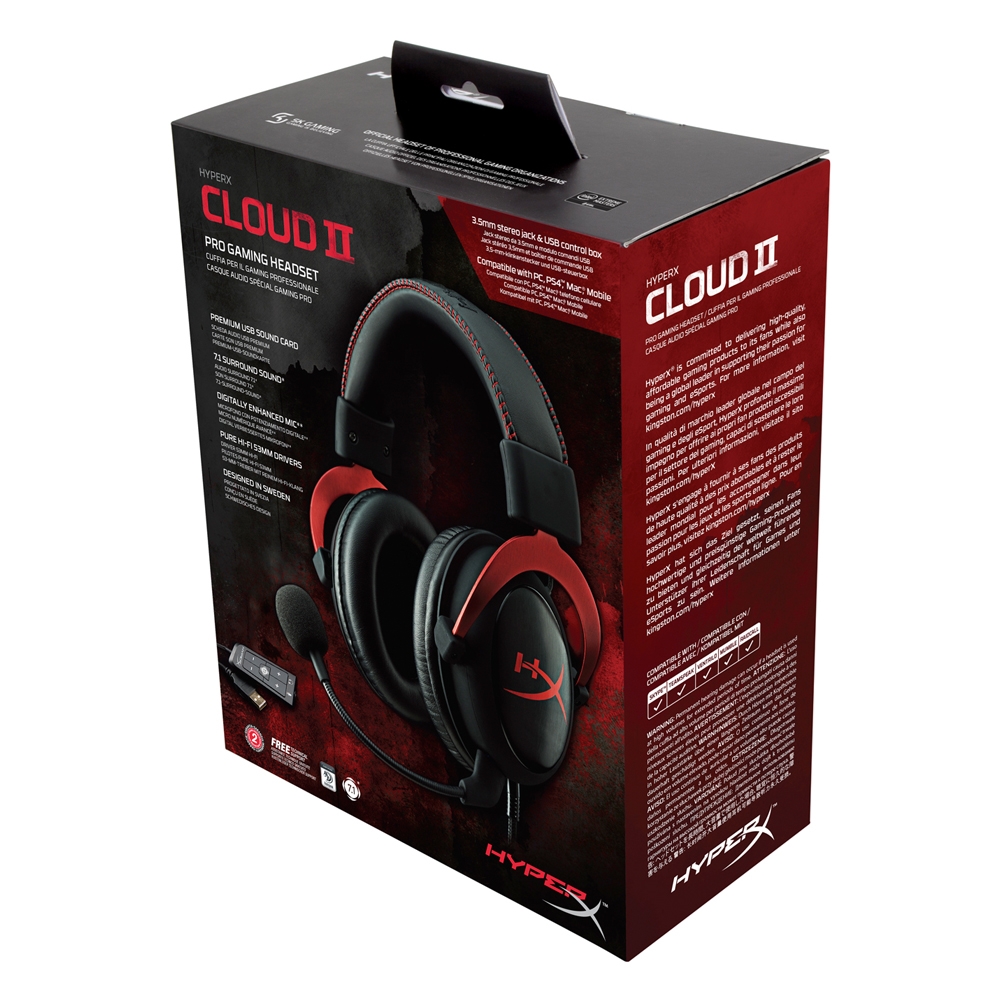 Performance – Very Good for its Price

While The Kingston’s HyperX Cloud II has a very sweet sound output it may still be considered lacking for the audiophile audiences. We tested the headset in different environments including Counter-Strike: Global Offensive (CSGO), Playeruknown’s Battlegrounds (PUBG), Assassin’s Creed Unity, and Dark Souls where the surround sound makes a huge difference both quality of enjoyment-wise as well as gives a competitive advantage over the users without 7.1 surround technology. while consistently speaking over the VoIP software. Considering the fact that this headset is marketed for gaming audiences and not studio audio recording professionals it faired really well. The 7.1 surround sound made 3D movement and navigation very clear and hearable in all of the games especially in comparison to the normal mode, which can be switched on the fly.  The random people walking around and making background noises were much easily understandable in Assassin’s Creed’s overloaded streets of Paris and the beautiful soundtracks of Dark Souls 3 were very clearly hearable even though we had a lot of frontside sound from the actual battle where the final boss was running around trying to bash our heads in. Those three notes still bring shivers down our spines every time. You know exactly what we are talking about here.

Some people may not even consider this an issue, however, the bass performance of the headset leaves the user desiring more. The barrage of artillery in the red zones in PUBG and  grenade and C4 explosions in CSGO were not as powerful as one would expect especially in comparison to the similarly priced Polk Striker ZX, however by no means does it mean that the bass is not present. It is still there and in our humble opinion for the price point in addition to the level of comfort and other performance the headset offers is still not bad at all. This is offset by the fact that the sound is very clear. This means distinguishing between ambiance and actual footsteps in PUBG was that much easier even at the distance.

Not only is HyperX Cloud II headset amazing for gaming, but they are also extremely useful for watching an eerie movie or even casually listening to music. The frequency coverage is good enough for the casual listener to enjoy their Spotify playlist and hear every instrument clearly. This shows how much Kingston has dedicated to sound development. It is even more apparent when we consider just how many industries dump millions into the sound development of their products. Perhaps the weirdest one is the online casino industry that relies on that “Cha Ching” sound to hook their players. In fact, developers who are behind the top Canadian slots online have mentioned that in the past, only about 5% of the workload was dedicated to sound design, now it’s more like 30%.

The satisfaction of the same industry extends to the microphone as well as it is what you would expect. The sound is clear and noise cancellation works fantastically, which helps online blackjack dealers to work in the environment where the other speakers in the room will not be heard at all. To highlight how good the noise cancellation is we tried blasting music next to your computer in full volume and the users on the other side of the VoIP software have not heard a thing. Sometimes it may be a bit too much though as we have noticed that if the microphone is moved a tad bit far away from the mouth the speaker himself could not be heard.

Comfort – One of The Best

Comfort is where the HyperX Cloud II shines. The headset is simply one of the most snuggly ones we have worn probably ever. The whole headset is only 11 ounces or 320 grams for European readers, which means it never feels heavy on the head. In addition to that Kingston provides memory-foam ear cups and headband, which are a very comfortable fit even on top of the glasses and extended period of time i.e. the headset never hurts even if one wears it for the whole day straight. It never feels too tight or too loose. We were unable to find anyone in the office who stated any criticism in connection with the comfort of this headset.

If the leather feel of the default earcups is not your thing then the HyperX Cloud II conveniently comes with plush replacements to cater to every type of user. This is great considering the fact that a lot of other, even expensive, headset developers do not offer this option straight out of the box.

The HyperX Cloud II is a sturdy headset with admirable sound quality. The partially metal casing with memory-foam earpads as well as top holders are a godsent to people who like long gaming sessions. The microphone offers very high-quality input, however, can be a bit inconvenient if you want to have the tip a bit away from your mouth if you are eating something while speaking as you will have to move the microphone up and down a bit to adjust it enough for your voice to be heard and your mouth to be clear.

On the visual side, the headset looks fantastic and can be used both indoors and outdoors. The detachable microphone hole can be covered up with the little rubber cover, which comes with the headset.