Bumbling around the internet we stumbled upon some awesome info-graphs by the bloggers over on Betway. The guys and girls over there sent off 12 sets of randomly selected games console and computers, as well as a kitchen table and toilet seat to a special lab to test how filthy they really are, the results might surprise you..

How Much Bacteria is on the average console:

Bad news for PlayStation fans: the top-selling console of the latest generation is also the least clean, with only PCs showing more bacteria.

Overall, the sample PlayStations analysed had 72.5 colony-forming bacteria units per swab taken. That’s 2.4-times more than you would find on a toilet seat.

The worst part of the console for bacterial growth are the buttons and the joysticks, where the median number of colony-forming units was 190: higher than the equivalent on any other platform. In the worst cases among the sample set, this reached as high as 650 units: more than double the number you would expect on a kitchen surface.

One of the cleaner gaming platforms, the Xbox consoles tested showed a median of 62.5 colony-forming units per swab, more than double that found on a toilet seat.

But while the number on the triggers was the lowest across all platforms tested at only 15, the controller handles showed the highest, at 82.5.

The Xbox also showed some of the most dirty samples, with the worst console tested having 5,614 colony-forming units on the controller’s buttons, though this wasn’t a common occurrence across those tested.

The PC is often an outsider in discussions about games consoles, but in terms of bacteria it’s the worst by a significant margin.

Though keyboards show plenty of signs of colony-forming units with a median of 165 per swab, it’s actually the mouse that picks up the most bacterial material.

A median mouse swab shows 247.5 colony-forming units: that’s only 27.5 fewer than a kitchen surface, and it likely doesn’t receive the same level of regular cleaning with disinfectant products due to the risk to the electric components.

Even a PC’s “on” button is significantly worse than the majority of places tested across all platforms, with a median of 115 colony-forming units per swab.

The Nintendo Switch offers the cleanest version of gaming with a median of only 55 colony-forming units per swab.

Though this is still 25 more than you would find on a toilet seat, it was one of the lowest numbers throughout all platforms tested.

The Joy Cons (controllers) tested registered the same number throughout, while the buttons were only marginally higher at 62.5.

How Dirty are your controllers:

Controllers under the microscope

The analysis has clearly revealed that our consoles do get quite dirty. However, when you’re deep into a gaming session, making sure your hands are clean before picking up the controller is probably not something you’re thinking of. There are many opportunities for germs to spread, whether they come from picking your nose, or little spit particles from shouting at your TV. 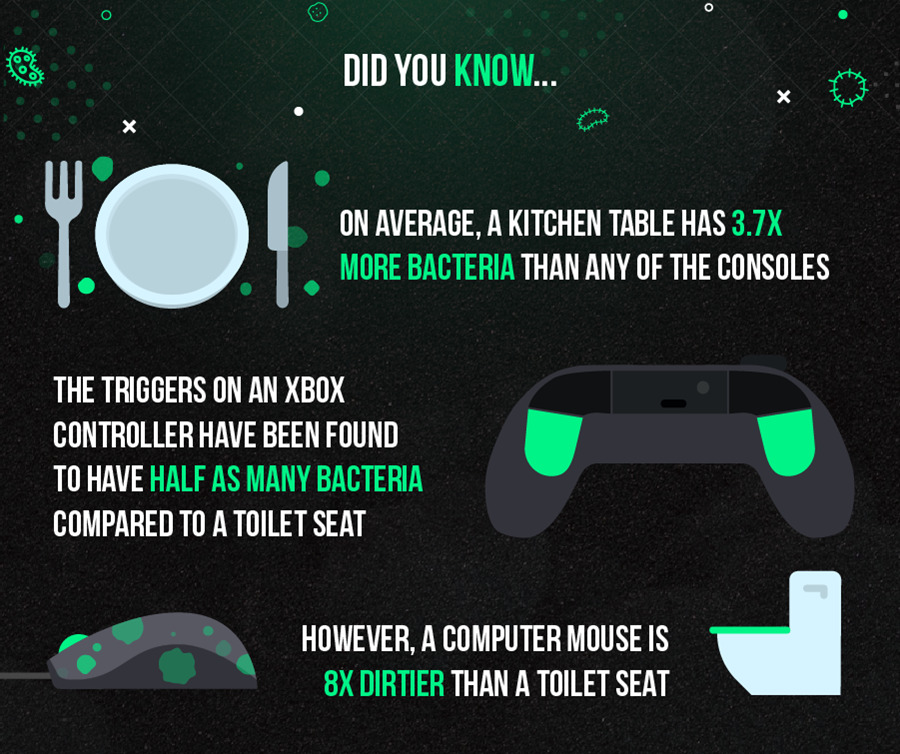 How to clean your console

To avoid a build-up of bacteria and mould, it’s important to regularly clean down your games console.

It doesn’t take much effort to keep it quite clean:

For the controllers, try not to use too much liquid to ensure you don’t accidentally damage your system. A small amount is fine.

For keyboards, it’s possible to get specialised cleaning solutions like deep-reaching gel or a spray that goes between the keys, allowing better access to hard-to-reach spots. This may also be useful for the buttons of games controllers.

But Console Don't Filthy Freak Game is out your