Hello everybody, now I’m sure many of you gamers out there know its been a short while since this years e3 conference where fallout 4 was announced and shown off and a mobile game of the fallout saga obviously in the pipeline, and sure enough one was released onto iOS and about 2 months after for android (2 weeks ago), I have spent the past 2 weeks playing it and here’s what I thought. 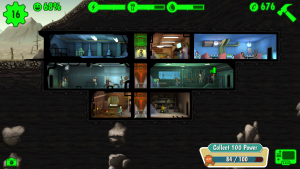 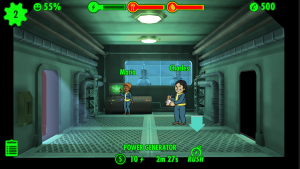 To start with I was extremely excited when fallout shelter dropped onto the play store and did not hesitate to download and on first inspection was amazing, your aim is to survive in an underground bunker of your design, the graphic qualities are brilliant and the closer you zoom into your vault rooms the effect of 3D takes over and even tilting your device will alter your aspect of the room.
the game uses the farming time based formula, each room serves a purpose, power, water, and food being your main resource without which your vault will slowly shut down one room at a time and the bigger the room the more dwellers you can get to work in it.
Of course you cant have them working all the time so your dwellers need a place to relax and sleep which brings me to another room within what i call the starter pack, the living quarters. 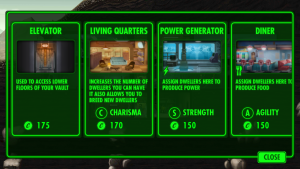 Not just for relaxing because this room can be used to produce dwellers, that’s right your little guys have babies because you can only rely on random guys knocking on your door for so long of course this takes time even fallout babies dont just appear out of thin air and even then they need to grow up.
You can decide to let any of your guys travel the wastelands to fight off raiders and loot for caps (in game currency) be warned the longer you leave them out there the more prone to death they are and the longer it will take them to come back so arm them well, but dont fret if they do die you can revive them for caps. 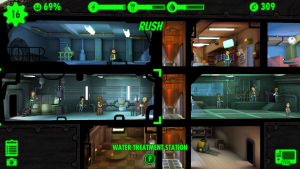 There are in app purchases (iap’s) for friendly little robot guys who will collect your resources for you when offline although not necessary.
My biggest problem with the game is no cloud storage meaning if like me you got pretty far into it and purchased the little robots and your phone completely crashes and have to factory reset you will loose everything including your purchase, now i have emailed the developers with my complaint about this oversight but as of yet i have had no reply, i also have a friend who downloaded it and has since decided to remove it as it kept deleting his vault.

It is of course early days for the app and i’m sure the dev’s are working tirelessly to fix these bugs and implement new features such as cloud storage, personally i would love to be able to visit friends vaults also but maybe just fix these bugs first.

So if you want to try this game out it is worth it but don’t be surprised if it doesn’t work perfectly but is definatly worth playing, i have included the links below for you guys and as always please share and join in with your comments.