So for the last couple of weeks, I’ve been using the Tronfy T3 Bluetooth headphones. I’ve had experience with another model in the past, and have an appreciation for the convenience that a wireless connection can bring. To my surprise, this one had some features that I didn’t find in my previous experience, as well as some points in common. 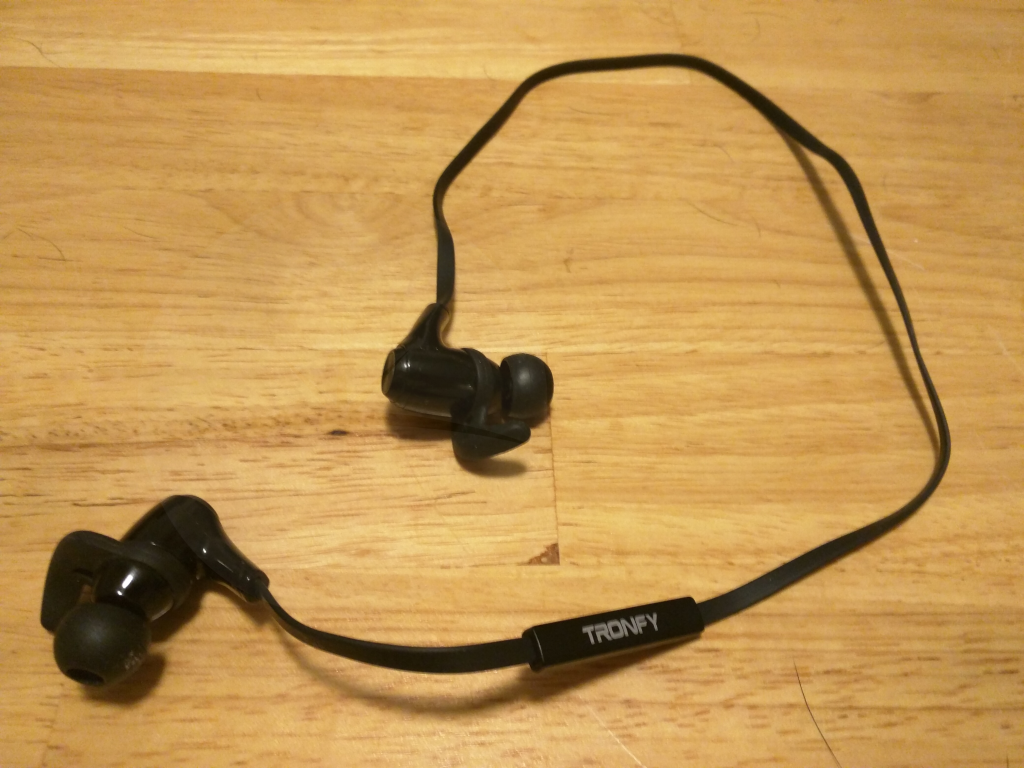 First, the headphones’ appearance. Sporting an all black look, they aren’t going to stand out very much. For me that is a perk, but as the saying goes, there’s no accounting for Ryan’s taste. I tend to prefer black, so it was working for me. The headphones are connected together by a rubber/soft plastic chord (more on that later), of matching color. The actual ear pieces themselves are right angles in their shape; that is, they use the buds to remain secure within your ear, while they continue outward from the ear to turn 90 degrees in a downward direction. They stick out a little bit, so they are easier for people to notice when compared to conventional ear buds. On the connecting strap, near the unit for the right ear, sits the controls: three buttons reside on the “panel” (for lack of a better word), and are used for things like pause/play, volume control, powering the unit on and off, and the like. The outward facing surfaces (opposite where the ear buds would face, and not in the direction of the floor) is a flat surface. Beneath one of these, opened by a fingernail or similar sized object, sits the micro-USB charging port. It was tricky to find at first, and I had to google around as the included instructions weren’t very helpful on this point. Once you get the cover off, it makes sense. It’s almost like the manufacturer did TOO good of a job camouflaging it. 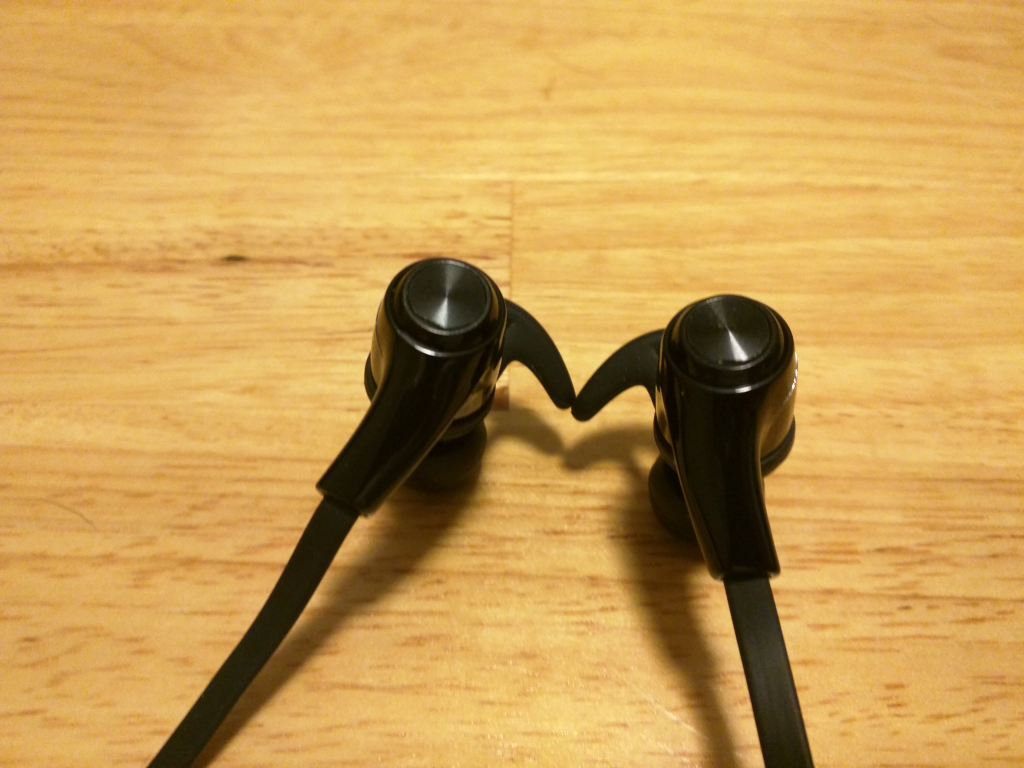 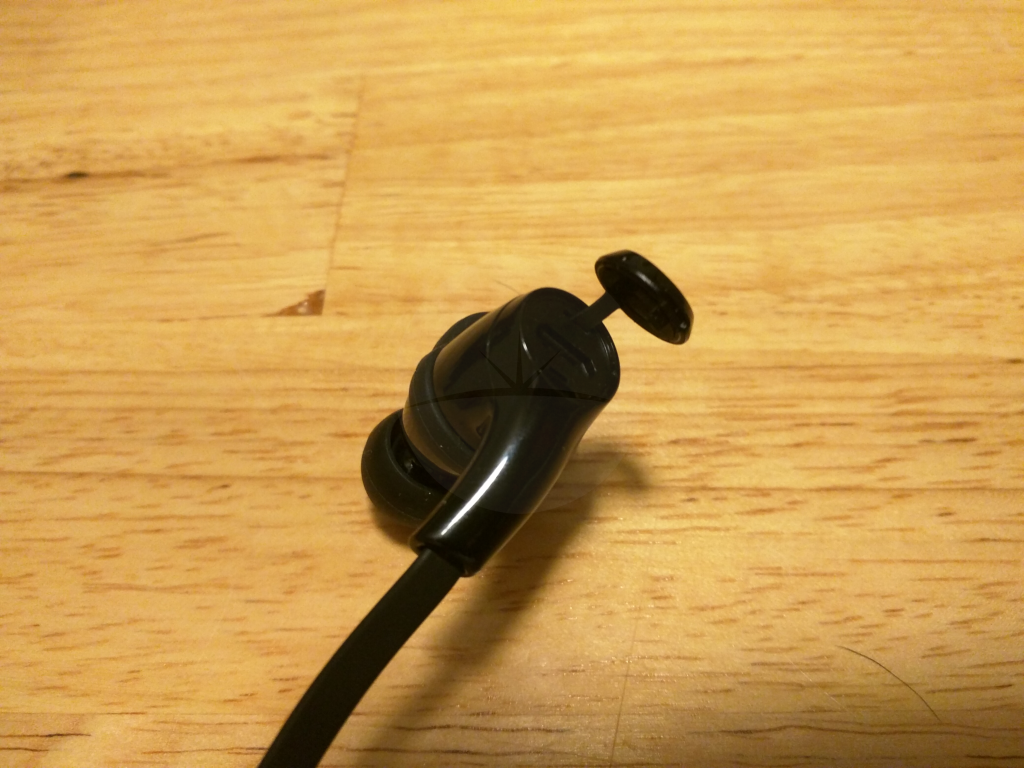 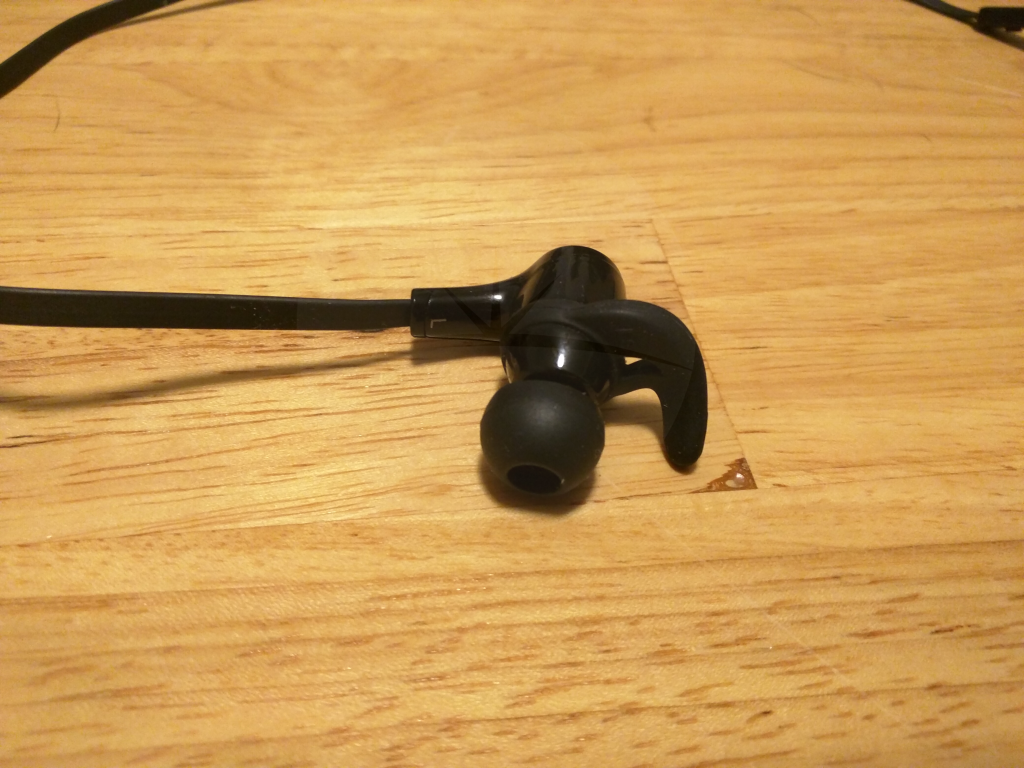 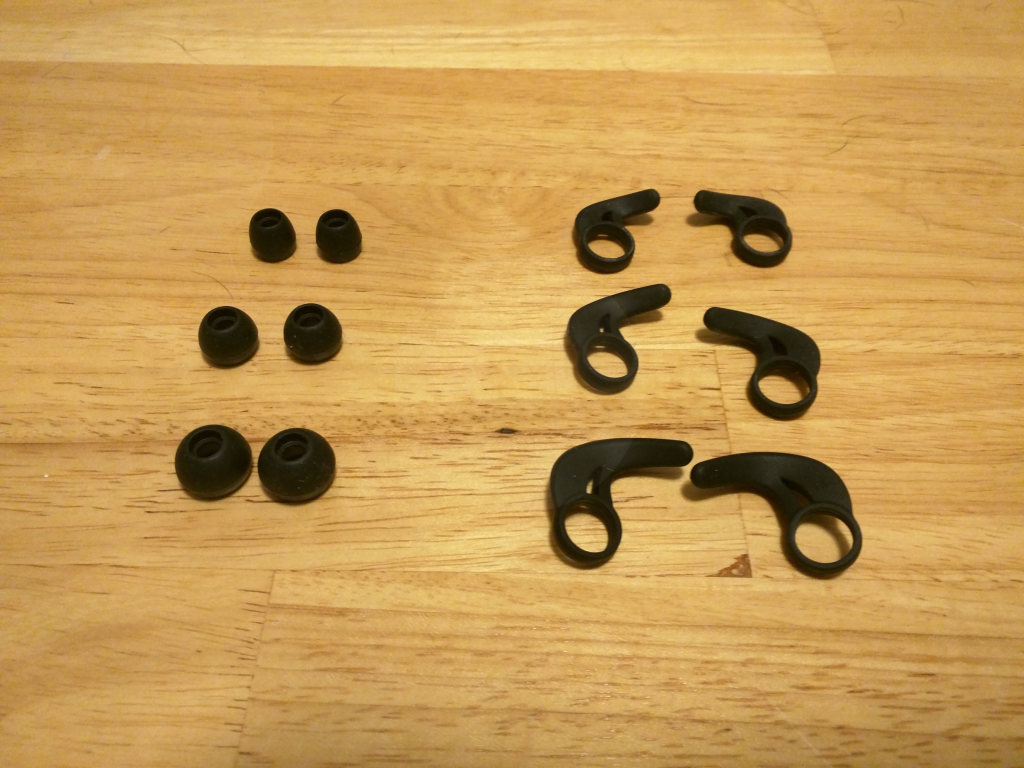 Depending on the size and shape of your ear, you’ll need to experiment a bit with these to find the winning combination for you, but I was able to find one that works well. Once I had a set that fit, both the bud and stabilizer worked in tandem to keep the unit secure in my ear, and held it in place far enough to block out a lot of background noise; if you need to hear what is, or might be, going on around you, these may not be a good match for you. While securely in place, everything worked at the expense of hearing anything outside of the ear buds. I tried to position them in various ways so as to let background noise in while I listened to audio, only to find that it was difficult for me to keep them from falling out unless they were positioned in such a way as to forego background noise. If that’s your goal, then these ear buds will do just fine. They aren’t noise cancelling mind you, they just do a solid job of keeping out what’s going on around you. 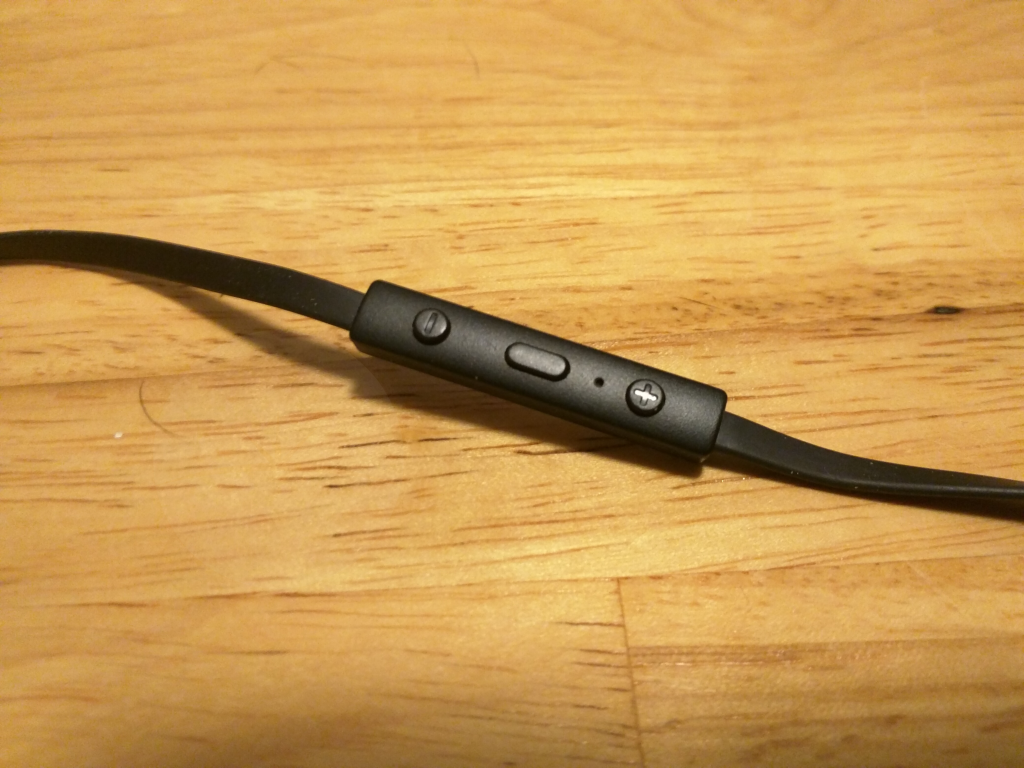 The controls are fairly straight foward. As mentioned before, there are three of them, all sitting on a plastic row that’s located slightly below the right ear. The top and bottom buttons are fairly small, used only for volume, and bracket a taller button in the middle that has different functions. Pressing and holding will power it up, and pair it for example. In a nice little touch by the manufacturer, the earbuds will speak “Power On” and “Connection Successful” whenever I fire them up. On the converse, it would say “Power Off” when I shut them down. When in use, the middle button also toggles the pause/play function of whatever I was listening to, which was mainly podcasts and audiobooks. When I click it twice in swift and rapid succession, it initiates a phonecall to whoever I spoked with last. I guess this would be a nice function if you remember who you spoke with last, but it felt more like a wild card for me since I never knew who it would ring up, as I don’t make lots of calls to begin with. 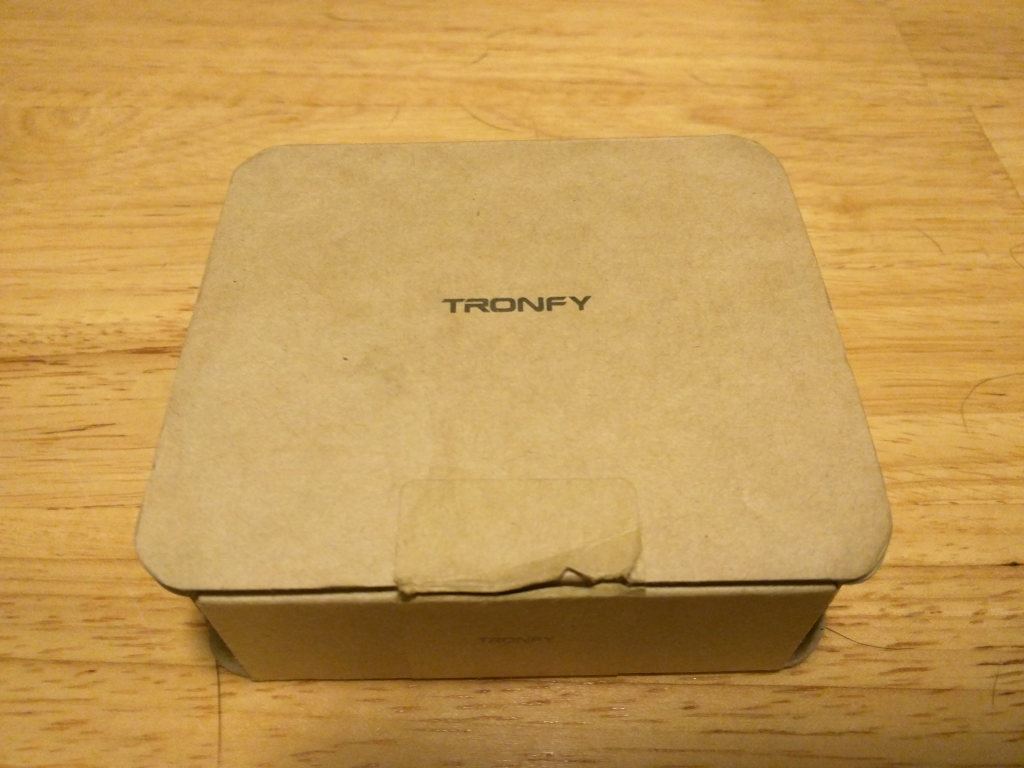 The performance of the unit was decent, overall. The sound was fairly “middle of the road”. I am no audiophile, but what I heard was OK. I doubt audiophiles would be happy with something like this, but at the same time, there wasn’t much to complain about either. Highs were high enough, lows were low enough. It didn’t “wow” me, but it didn’t outright stink either. Serviceable would be a fitting word here. So if you’re not super picky, the sound should get the job done for you. I would describe the battery in the same fashion. From being run down to nothing, it took a little under ninety minutes to charge it back up to full. On a full charge, I right around five hours, nearly on the button. As the battery winds down, the disembodied female voice will announce “Power Low”, and pauses whatever you are listening to, to get this message across. You will hear this some five times, about (what felt like) every sixty to ninety seconds, until it announces that it is powering down, and that’s it; the one I owned prior started that routine some thirty minutes before it shut down, so this one interrupts me comparatively little, and is clearly in the “plus” column. In short, I wasn’t bothered about the battery until it was actually urgent and warranted my being interrupted. Like many other Bluetooth headsets, it can also handle incoming calls. To my surprise, anyone I spoke to sounded awful. Voices were tinny, and of poor quality; considering the music was so awful, this doesn’t make much sense to me. Oddly enough, the people I spoke to on the phone didn’t seem to have any trouble or complaints. In one phone call with my mother, I asked her outright (later) about how I sounded, and she remarked that I didn’t sound any different than normal. 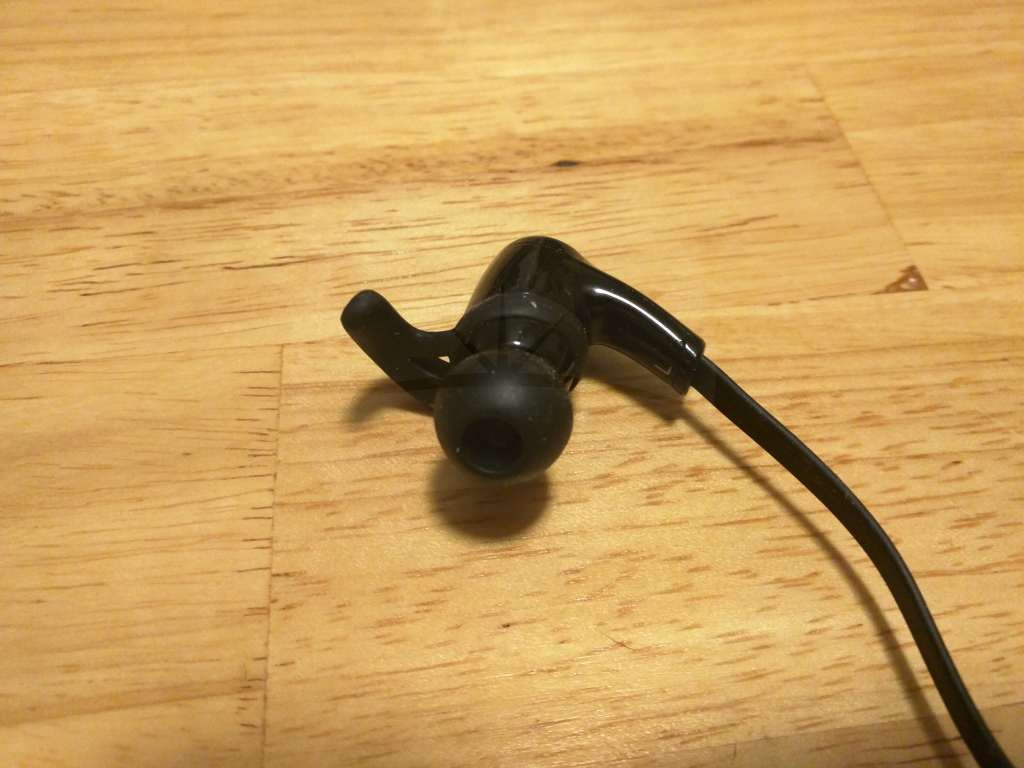 Lastly, I’ll address comfort. These ear buds were more adequately comfortable to use in shorter bursts, but got less comfortable if they were being used for hours on end. First, the chord that connects the two units. With it being about a foot long, one might think that was adequate. Yet, if I was wearing a hoodie, or if it got caught in a fold in the back of my neck (such as might happen when you look upwards), or even just catching against  the skin, I would notice a tug on one ear bud when I turned my head to one side. If the chord was twisted around, that also seemed to catch on clothing or what have you. I could also let the chord dangle beneath my chin, but in its own way that was no better. So, from time to time, it was something that needed minding, yet not at other times. I wasn’t quite able to figure out a pattern as to when or why it would end up tugging on one side, it just seemed to happen on occasion. The other downside I noticed in extended usage was that, with the snug fit, perspiration would seem to accumulate a little bit, within the ear canal. This wasn’t a problem in shorter bursts, which is my typical use case for these (like, snow blowing or yard work), but when I was listening to something for hours on end, I did notice it. Nothing problematic mind you, but if that grosses you out, keep in mind the possibility.
In the end, these did the job. I spend little time on phone calls, so I can easily tolerate poor sounding callers. If that’s not your scenario, I doubt they’d be for you. If “content is king” in your use case, these can do the job. Music sounded good enough, battery life was good enough, and it didn’t require any special charging cable, though it comes with a micro USB cable of its own, and doesn’t bug you about the battery until it absolutely needs to. On the whole, I’d give this thing a six. Comfy enough in short bursts, and sounds good enough to listen with (and not bad for the asking price), while falling short on phone calls, which still matter these days.